0404 Carra (hamlet) Human
On an island in the middle of East Bay is the fishing hamlet of Carra. This hamlet is home to 75 humans living in mud and wattle huts. Conditions here are wretched and these people are among the poorest on the island. The headman of the hamlet, Moran Loder is also the leader of the small Piall thieves’ guild. While he rules Carra with an iron hand severely punishing anybody cooperating with Helmar and his yeoman. 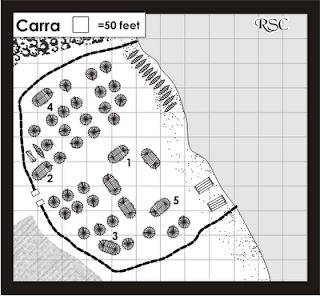 For Carras I decided to take a similar tack to work I did on the Brotherhood of the Lion and focus on making a memorable cast character to populate the thieves guild of the Isle of Piall. I was helped by the excellent NPC tables from Paizo's Gamemastery Guide I coded them up for Inspiration Pad Pro. This is what I rolled.

Kals
Background: Comes from a long line of tanners
Goal: Become the recipient of a actual miracle
Physical: Homely
Personality: Speaks with great formality; never used contractions and employs bigger words than necessary.
Secrets: Was a very different creature prior to reincarnation
Reward Buy you a small gift:

Orsin
That it for part XV next is Part XVI which will be the final village in this series.

YAY! I've been waiting with bated breath for this to continue!

I'm very glad you decided to continue this series. As I'm new to the concept of "sandbox" games, I find this series more helpful than words can express. It sure is a departure from my usual DMing style, but I think this will fit much better. Keep up the good work!

When's the next one?

I'm a big fan of world creation material and I'm very interested in seeing your example completed. I have greatly enjoyed the read since being pointed here from another blog (which one escapes me now - mea culpa).

I would totally buy a PDF compilation of all these posts. Keep up the good work!