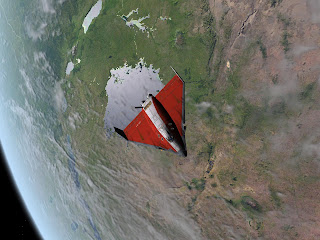 I have another hobby (currently moribund while I work on publishing stuff) that involves programming add-ons for the Orbiter Space Simulator. This is not a game persay but rather a simulator similar to Microsoft Flight Simulator.

It can be used by people of different skill level and interests. The trick is that many of the default vessels are semi-realistic in that they are way overpowered compared to what we can really build. So they are lot more forgiving for novices getting the hang of orbiting and travelling in space. A realistic Space Shuttle is included as well as an orbiting International Space Station.

There are huge variety of add-ons at the Orbiter Hangar from my ultra realistic Mercury and Gemni to the fanciful. Note that Orbiter 2010 just has been released and many of the add-ons, my own included run better on the previous version Orbiter 2006. It still avaliable for download.

Best of all it all free.
Posted by Robert Conley at 10:32 AM

Years ago I had a program (for what operating system I no longer recall) that allowed you to create a solar system. The program could, if I recall, tell you the range of mass for your planets and sun so that you'd have stable orbits. But it would still simulate and calculate the N-body problem of your solar system.
The simulationist in me wants such a program not just for traveller type games but also to do calendars for fantasy worlds.

Theoretically I have the talent to create such a thing myself, having a degree in aerospace and having programed the 3-body problem back in the day... a lifetime ago. You know, back when Fortran was the go-to language for the sciences.

Curious if in your survey of orbital programs if you've found anything like that.