Does mapping has to be boring? Nah!

Jason Sholtis is a local artist (NW PA) that along with his friend John Larrey did the illustration. Late in the project Jason came up with some ideas that I went with. Instead of adding more money to the contract we decided to do a trade; maps for art.

I met Jason and John at a convention held in Erie. There he was running a module set in the The Unfathomable Underworld. The adventure was a bit of a funhouse and very well done. There were one eyed dinosaurs, fungus men, and I think a city in miniature (correct me on this). Definitely Jeff Rients style of gonzo with a touch of Cthulu creepy crawlies.

Well it turns out Jason is publishing this in the next issue of Knockspell. So as part of the trade I did his map. Now his original was pretty good but it was pretty large being drawn to battlemat scale of 1" per square. Normally I do everything on a map but there was just some things that had to come over from the original so Jason drew up some of the "bits" that I placed on the maps. A dead giant, a tyrannoclops. and so on. It worked out pretty well.

In the finishing up process I created a master legend. I thought this module needed something extra. This adventure didn't need the usual legend. 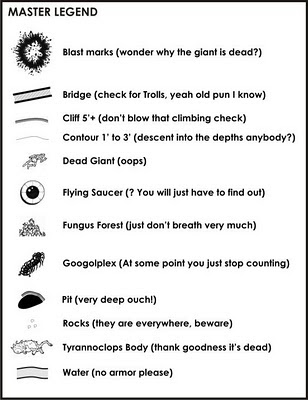 Here is a sample of the map you will see in Knockspell. 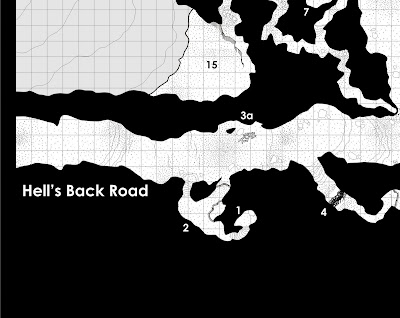 Enjoy and remember mapping doesn't need to be boring.
Posted by Robert Conley at 11:08 AM

no comments on this yet? Already had to steal a dead Tyrannoclops for last Saturday's game. The players gave me that "oh yeah" look that I live for, so thanks!