Wizards just released a free kids version of D&D called Monsters Slayers Heroes of Hesiod. So today my youngest found the box of dice that I was given from Morningstar Games in Savannah GA. He wanted it and I said "sure you can have it as long as you take care of it". So he goes away for a 1/2 hour and comes back and wants to play a game with me. I said find as long as I get to play a game of my own with him. (He can be stubborn about trying anything new).

He games was fun, he used all my D&D props and setup this coliseum where each of our guys (lego figures) had to run around gathering energy barrels. How far we move is determined by a d20 roll. After a few rounds of this we switched to Monster Slayers.

Monster Slayers is a pretty simple game. Hit Points, Ascending AC, Move X squares, d20+bonus to hit, everybody has a special power or two that written on the cards. The adventure is simple as well. You completed your monster fighting training which every kid in Hesiod is required to do. Now for your final exam you have to fight four monster. A Bulette, A young red dragon, a beholder, and a swarm of pixie. Generally when a monster get to half hit points or there is only one the instructor will release another one.

Of course Gregory made Lego figures for this. 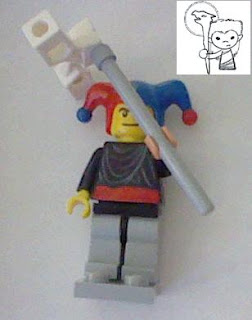 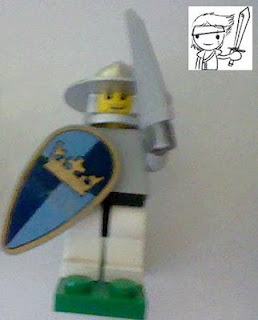 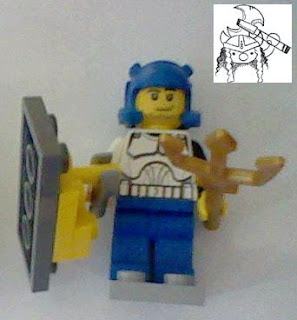 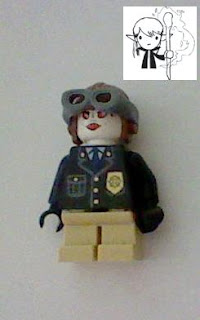 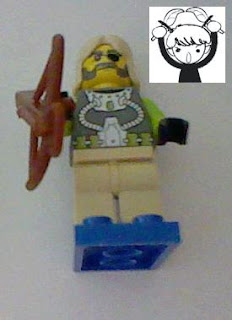 It was a whole of fun, plus my boy can roll! He rolled a total of six nat 20s in the fight once two in a row! The rule and special effects are easy to referee.

The result four monsters dead and everybody was alive.

He wants to play some more so I will work up another scenario for him. Probably use the Ruin of Ramat as finding a little dog seems to be a win with the younger kids.
Posted by Robert Conley at 8:21 PM

Thanks for the play report. My oldest is *almost* old enough to play and I've seen a lot of buzz about Monster Slayers. I hope to check it out soon.

I have most of those Legos....

I have no children.


Seriously, though, for all that I bag on WotC, the release of something like this...I can actually get behind it.

Sounds like a lot of fun Rob. I'm sure oyu had just as much fun as your little one. I love the lego guys as minatures. Probably made it less scary for him. I know the last time you two played he got scared and ran out of the dungeon.