This is the thirteenth in a series detailing the 34 steps I recommended for making a Fantasy Sandbox Campaign. Today's post will cover part of the following step.

0204 Sandpoint (village) Halfling
This is home to over 300 halflings who farm the fertile bottomlands and tend flocks of sheep on the South Downs. Buck Hightower is the current Lord of Sandpoint. The Hightowers of Sandpoint have long been the most powerful and wealthiest family in Sandpoint. Recently their preeminence has been challenged by the Oldhams who have grown wealthy on the wool trade. Albrus Oldham has been recently appointed the Reeve of Sandpoint by the King’s Sheriff
to collect the various Royal fees and duties. 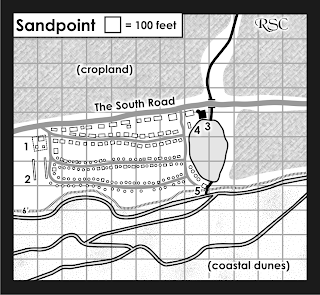 Sandpoint is located on a low bluff overlooking the coastal dunes of the regions. From here it is about a 1/2 mile to the high tide mark on the beach. The bluff is only 6' high however it is steadily eroding. This has caused the wealthiest halflings to live near the king's road and the poorest nearest the bluff. The wide spaces between the rows of houses are used as pastures and gardens. Many make a small sum of money renting their pasture during the annual sheep shearing.
Note: To the east the river flows south from Mount Devon through the South Downs forming a steep ravine through the bluff. After emerging from the bluff it turn west to flow past Sandpoint. From the bluff to the sea it forms a braided flood plain with the channels changing every year. It enters the Midland Sea about a mile to the southwest of Sandpoint.
Sometimes it is hard to come up with a village layout. In this case I turn to historical maps and other gaming products particularly Harn for inspiration.

There are several websites one can use as a resource. One I like particularly is The Aedificium a living history for England. Of particular interest is this map page which has several maps done in the Harn style which makes them very useful for gaming. The one that inspired Sandpoint was Serlby.

One interesting thing to do is look at the Nottingham map and at some of the village map. You realize that some of these places are literally a stone throw away from each. Not particularly useful for gaming as fantasy campaigns work better with a bit more wilderness between settlements. However it is interesting to see how the medieval landscape was laid out.

Finally a map making tip. Many probably wonder how I did the cropland. Many vector and paint programs have the ability to use textures. These are bitmap or bitmap patterns that you can use to fill shapes with. This particular one was done using Corel Draw using a cloth canvas pattern rotated 45 degrees.

I created two full 8.5 by 11 bitmaps in TIFF format at 300 dpi that you can use. One is grayscale and the other is full color CMYK. The full color use yellow and brown to give an impression of crop soil along with the texture. You can download it here.

That it for part XIII next is Part XIV.
Posted by Robert Conley at 6:00 AM