Harn Day: It just got a whole lot bigger

This week Kelestia Productions released Venârivè: Northwestern Lýthia. This supplement covers the northwestern region of the continent of Lythia which Harn is part of. This area is roughly the size of europe and contains a similar range of cultures. Like Harn vs England the various cultures of Venârivè only faintly echo their earthly counterparts. Some, like the matriarchal Empire of Byria have no Earth equivalent.

So what do you get for your $35? First is is a PDF only product for now. It comes with three PDFs, The 250 page Venârivè supplement itself, an extensive index, and a map pdf. Plus it comes with a excel spreadsheet that has just about every table in the PDF including a lot more data for the various locales.

The Map PDF is absolutely gorgeous, it is saved in a vector format so you have near infinite zoom capability. It has dozens of layers allowing you to tweak the maps to show exactly what you want. It may be a bit slow on some system as the vector format takes a bit of time to draw. But the result is a very nicely rendered map. There is enough detail for the dedicated harn fan to use as a base for their own detailed maps. 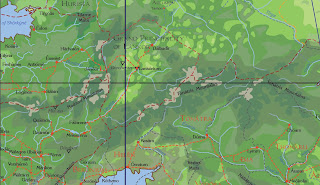 They have layers for historical boundaries, trade roughs, climate, rainfall. Just about everybody a person could want to know about a campaign setting.

Venârivè itself is 250 pages. First you get a two page broad overview of the region. Next is are 11 pages devoted to the history of Venârivè. Then a 4 page timelime summarizing the history. Six pages on the Cultures and Languages of Venârivè.

The following sections are of general use to any low fantasy campaign ground in realism.
Next seven pages are on the Societies and Government of Venârivè including types not covered in any Harn product before this like Imperial states. Five pages on Law (always useful for dealing with those pesky PCs). Four pages on Military and Warfare including naval warfare. Six pages on Economics and Trade including Nomadic and Pastoralist economies. Two pages on the Mangai, the association of guilds. Probably the least realistic aspect of Harn/Venârivè setup. Seventeen pages on Daily Life in Venârivè. This section is packed with interesting little tidbits that can be used as seeds for adventures.

The next sections are Venârivè specific. Two pages on Folklore and Legends. Useful for roleplaying the inhabitants as they don't have the God's eye view the referee has. Six pages on religion. Like my own Majestic Wilderlands Venârivè is setup with only a few deities that are known by different names in different lands. How they are worshiped varies as well but there is a core that most worshipers of that deities recognize. Seven pages on the Arcane side of Venârivè mostly on the Guild of Arcane Lord and the Shek Pvar.

Finally the meat of the product, a 63 page gazetteer of all the realms of Venârivè from Harn in the west to Dalkesh in the east. From Ivinia in the North to Anzeloria in the south. Some are only a handful of paragraphs, while the more important or interesting realms get two to three pages. Long time fans of Harn will not be disappointed in this material.

The main part of the supplement winds up with nine pages about various famous individuals in Venârivè. What I like about this section is not your usual king's list but contains artists, writers, and philosophers. A skilled referee can use the information here to make some interesting back stories to his adventures. For example a wealthy patron could send the players into an old imperial Àzeryáni ruins to find a valuable statue carved by Akélnos el Vêgasun. Another wants them to find a lost recipe of Enârla el Tothánko a famed chef to the Àzeryáni Emperors two hundred years ago.

But the supplement doesn't end there. It comes with 19 appendices.

A comprehensive price list that expands on the one in Harn and Harnmaster. Note that for older editions of D&D one Harnic silver penny is roughly equivalent to a D&D silver piece. Incomes for various occupations in Harn (you will see why there is a reason why the players are adventuring). Various Venârivè trade goods, A listing of all the ports and markets in Venârivè. Very similar to Traveller subsector listings.

Then we get Tide tables, the old Harn weather charts get an expansion to cover all the climates from the subpolar north to the wet tropical south. Harn weather charts are perhaps the best I seen for roleplaying games. They are easy to use and generally don't give nonsense results. Finally the appendices ends with a map of Venârivè and index of locations including the all important ancient locations.

Both Kelestia Productions and Columbia Games are notorious for their slow release schedule for Harn products. But they are finally done and released they are often masterfully done. Venârivè is no exception. For a long time I preferred the traditional style of Columbia Games over the color style of the various Kelestia releases. But Venârivè may change my mind. It is well laid out and feels very much like you got your money's worth in both content and presentation.

For those who are not Harn fans Venârivè offers a one stop location for all things medieval and campaign realism. The lands are varied and many have unique histories that can be minded for your own campaign setting. Maybe using tide tables is pushing it for me but I can see it being important for those ports where you can only get out twice a day.

While it doesn't offer a complete rule subsystem aka Traveller for merchant activities all the raw data is here. Using Venârivè as an example you could roll your own traveller style merchant system but for your fantasy campaign.

I give this a A+ all across the board.
Posted by Robert Conley at 6:00 AM

This sounds cool, and would trigger my collector instincts for anything that could be justified as a campaign resource...

I really hope they go print with this one. I'm going to have to by it next week.