I apologize for the long hiatus on the Fantasy Sandbox series. The main issue was the next steps involve a lot of map drawing. My map time for the past several months was taken up by other projects. To speed things along I am breaking Step 24 where I draw maps for several locale into more managable chunks. Today is about the village of Hawth.
Part XI

This is the twelth in a series detailing the 34 steps I recommended for making a Fantasy Sandbox Campaign. Today's post will cover part of the following step.

From Step VIII
0105 Hawth (village) Dwarf
Located just outside of the Southpoint mine this is home to 200 dwarves. Their homes are carved out of the rocky walls of the canyon leading to the minehead. Lord Dair Darkiron (Ftr5, L) directs the mining operations. Original motherlodes are beginning to play out. Lord Dair opened a new section of mine that promises renewed riches but a rash of disappearances has caused it to be closed up. Lord Dair’s brother, Gamli is challenging Dair’s leadership of the clan. Lord Dair will pay handsomely to anybody who can find out what has happened in mine. 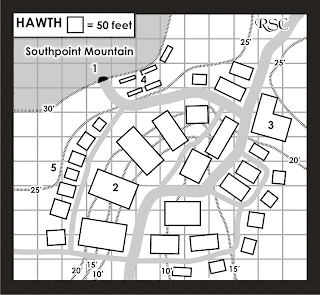 Note: Most of the houses in Hawth are made of stone and built into the terrain. Typically they are three levels with the highest above ground, the second level partially covered by the slope and the third completely underground.


The maps is draw in a quick style with a few notes. By adopting this style you can quickly generate material for five or six of the most important locales outside of the character's home base. If one of these locales become more important you have a base from which to flesh out the final details.

As for the design of the village I was inspired by several villages in Greece and Turkey that had to adapt to the rocky terrain of the region. Often built against steep slopes much of the building lies inside the hill or mountain.

That it for Part XII next is Part XIII and the halflings of Sandpoint
Posted by Robert Conley at 6:00 AM

This is great stuff. I'd love to see a tutorial on creating simple city maps like the one you've done here. I have to admit that I'm not very good at things like this, at least as yet.

Thanks for continuing the series.

Glad you picked the series back up, Rob. Looking forward to the rest.

Yes, this is great. Brief and to the point with lots of room to improvise or change. Just how a sandbox needs to be. Good series.

I'm looking forward to see your wilderness maps as well. Love the way you have developed this series.

Hey, I think I have some royalties coming.