From Step VIII0403 Datha (hamlet) Human
Datha is a small fishing hamlet on East Bay. A hundred humans live here in mud and wattle huts along the shoreline. The headman of the hamlet is Danis Hobrun who is thoroughly loyal to Baron Argus. Danis’ brother, Helmar is the yeoman in chief of the Baron’s small coast guard. Helmar and his fellow yeoman patrol shores of Piall looking for smugglers. 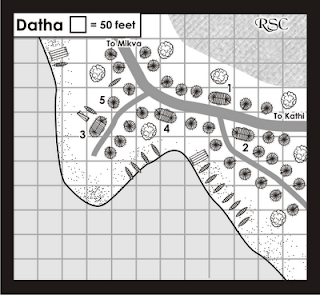 This village is typical of the type of settlement I make. Grimy, very medieval, and lots of intrigue even though is not earth shattering in scope. Players that get involved in these plots often wind up with valuable friends and allies.

This village also showcases my hut and boat symbols. Because I kept at mapping for so long I managed to accumulate a variety of symbols that allow me to throw together maps quickly. They were originally developed for a map of the Village of Woe in the Wilderlands of High Fantasy. I never finished it but you can see it partly done. 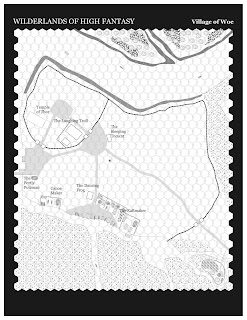 That it for part XIV next is Part XV.
Posted by Robert Conley at 6:00 AM

Rob - a couple of your pictures wont load when clicking through to the bigger image. Can you fix that so we can take a closer look?