Packing stuff inside the Hex 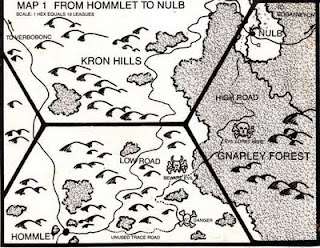 In a 30 by 30 square mile region no more than another 30 miles from a city (Verbobonc) there are only two villages! 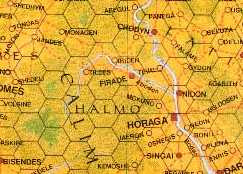 This section from the Trierzon Map by Columbia Games for the Harn line show more accurately the situation was in the high middle ages. (1200 AD to 1400 AD). Each 12.5 miles looked like the below map 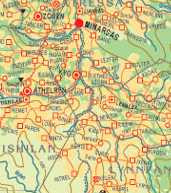 Each hex had one or two castle towns/keep villages and 20 to 30 manorial villages and abbeys. This was because urban populations needed a LOT of rural population to trade with to get the food they need. In addition because everything by horse or foot the rural villages need to be relatively close the market they sell too.

Despite the packed nature of the above map it was not that dense. If you were visit the region it would be like visiting a rural area in the eastern United States. There is plenty of woods and green space but you can't travel for a few miles without running into local inhabitants. Further from the core regions villages spread out until you reach areas like Russian Steppes. There the situation is like the map from T1-4 with village spaced tens of miles apart.

The historical setup is nice for a campaign where the endgame involve characters commanding armies. The density give a lot of places for the PCs to raise the troops they need for their armies. But even with that consideration it still too realistic, too packed for my taste.

My solution is somewhat like this. This is 12.5 miles per hex. 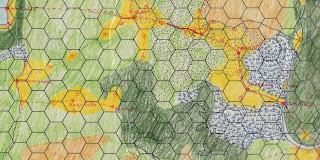 Blown up it looks something like the below. Note I don't have any detail for the above map so I put a insert below to show how it looks on the campaign map. 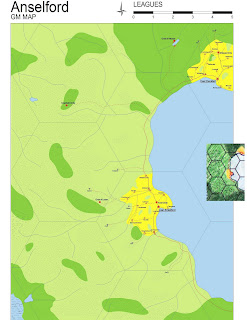 To me this is a nice compromise for having a dense population so PC have lot of places to interact with (and raise troops :D)

Recently I experimented with the following. 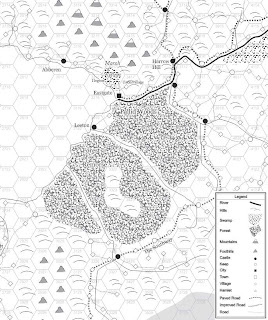 What I am trying here is to have every village on the map. In the campaign write up I will note how many hamlets are around the village so that the overall population is where I like to have it for the endgame stuff I run.

In the end the focus of your campaign is going to determine how much work you need to put into this stuff. If you are going about dungeon crawls and exploring vine covered ruins then the T1-4 style map may work perfect for you. But if you want to run battles or have players run realms then some thought is needed to as to how many people you are going to need and where they live.

Finally S John Ross' Medieval Demographics Made Easy is still the best and easiest to use source to crunch the numbers on this stuff.
Posted by Robert Conley at 6:00 AM

"What I am trying here is to have every village on the map. In the campaign write up I will note how many hamlets are around the village..."

That's a nice approach to the issue. I still prefer using 5-mile hexes in order to have less villages per hex, but writing down how many hamlets/thorps exist around a village is a lot better than my initial idea of writing everything on the map.

One of my groups has played once a month for over a year and are still within 20 miles of their origin point. My hex map has more on it than the Elemental Evil one you've shown, and I drill down and make more detailed maps of some areas.

One of the other things that kills me about fictional maps at this level of detail is the paucity of streams and creeks. In reality, agricultural areas are usually littered with them.

I recall an aspect of the old WFRP settlement patterns system. Within the area of influence of a larger settlement the GM was advised to roll a d6 and say the next village was that many miles away in the current direction of travel.

stirgessuck said...
One of the other things that kills me about fictional maps at this level of detail is the paucity of streams and creeks. In reality, agricultural areas are usually littered with them.

The Wilderlands topiography system indicated that only navigable rivers were shown on the map. The Judge should include a greater number ofminor water ways, just as you have indicated.

Still, a good post. Periodization is a difficult and finicky thing anyway.