Bat in the Attic Status Report #1

My next project will be the Beast of Kensla which is set in the Duchy of Dearthmead SE of City-State. So far I completed an outline and a list of maps to be completed. It well playtested I refereed it about 3 times now. I am shooting for a end of March 2010 release.

One of the things that didn't make into the Supplement was a mini campaign for the Majestic Wilderlands. I felt it would have make an already massive book to unwieldy for me and those who helped to edit and layout. I was thinking of making a free download but after reading the latest on the Fight On! forum I realized I have not submitting anything recently. I feel I can get it done before the deadline of January 9th, Much of it is written, I just need to finish it and give a final pass. Plus Dwayne and Tim been asking when I will DM again so this would serve as campaign prep too.

This is a preview of the map 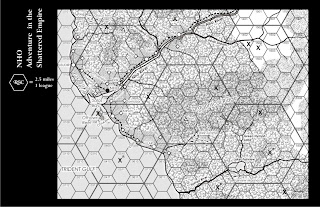 For those with the PDF there is now a original style cover for you to use if you choose to print out your book. You can download it from here. If you need the same type of card stock for the cover you can buy some from this site.

I got the print copy from Lulu and it look very good. The cover looks great far better than I expected. I fretted over the interior art and maps but after showing it to a couple of friends here in Meadville they assured me it looked fine.

Finally my plans are to still continue the How to make a Fantasy Sandbox. As you can see I was preoccupied with the development of the Majestic Wilderlands. Also the next steps involves a bit of map drawing and that takes time. The good news that these posts is a first draft for a expanded How to make a sandbox that I plan to release in the summer. I will include the Isle of Piall as well another complete sandbox setting the size of the one of the Points of Light settings.
Posted by Robert Conley at 6:00 AM

Very nice map there. I'd love to see several of these detailing the area around the CSIO/Modron/etc.