Of Overlords, Kings and Barons, Building a Feudal Setting Part 10

After the formation of the Confederation, The Overlord Lucius's power relative to the combined might of the clans and Dearthmead was at a low. Even the holdings of his own clan, Bulwark, has split with the newly formed Gaenost clan. Lucius did get the right to build a handful of keeps in the territories of the clans and Dearthmead. The keeps allowed Lucius to house his officials during peacetime and to serve as strongpoints in the time of war. Because of their recent rebellions, the Tharian Clans united against Dearthmead and allowed Lucius to build a castle on the shores of the Estuary of the Rogalaroon. However these new lands, what remained of Clan Bulwark's holdings, and City-State barely  provided Lucius with  enough revenue and men to fulfill his obligations as Overlord.

At first, the Overlord Lucius seemed content with the situation. After the formation of the Confederation, Lucus focused on compiling and writing the Codex Tharia, a code listing all the laws and customs to be used in adjudicating disputes and crimes between the clans along with Dearthmead. There was a section that laid out how the law code was to apply to City-State and the other territories personally controlled by Lucius. An observant scholars wondered at some of the provisions. As they would only make sense if Lucius ruled the confederation as he ruled is own personal territories. However Lucius pointed out they were only needed for the special case of City-State. Because that was the only territory where individuals from different clans, noble houses, and commoners met regularly to do business. For the most part the Codex Tharia was well received. The Tharian nobles saw that tradition was respected in the Overlord's courts. The Ghinorians now understood what to expect and were relieved that Lucius intended to continue the Rule of Law. The Codex provided only the foundation of Lucius grand plan. His next step occurred late in his reign when the dwarves of Thunderhold needed his help.

Thunderhold and City-State had a long history together. It was a dwarf named Atrabilorin who was the first Invincible Overlord. He was popular enough to have City-State help him estabilsh the Kingdom of Thunderhold as a refuge for his people after the fall of the Majestic Fastness caused by the Black Dragon Pan Caulderax. Later during the reign of the Tyrant Salm-Lorin, they allied with Lucius to liberate City-State from the mad mage. And afterward Lucius continued to deal with the dwarves honorably and even convinced the clans to allow an ambassador from Thunderhold to sit as a member of the Senate.

With the Confederation established, Lucius could focus on other projects. One of which is to revive trade between City-State and Thunderhold. To do that the Rorystone Road needed to be rebuilt and the Moonraker Moorlands swept clear of Orcs. Lucius cleverly got the Senate to refuse to help as it would only "benefit" his personal holdings over City-State. The Senate told the Overlord, that if he wanted the Road rebuilt he would have to do it himself.

And that is exactly what Lucius wanted. His personal forces and dwarven allies were more than enough to sweep the Orcs from Moonraker Moorlands. And his understanding of moneylending allow him to raise the money needed to rebuild the Rorystone Road. But most valuable was the fact that since the Senate told him to go at it alone. All the land and territory he won was his to do with as he saw fit.

Lucius divided the territory with Thunderhold and created the Northern March out of his half. He rebuild old castles and keeps and established new settlements. He handpicked men across the Confederation and had them personally swear fealty to him and his immediate family. Lucius was careful not to create any noble with a rank higher than of Baron. Higher positions were made into offices including the Sheriff of the Northern March and various bailiffs. 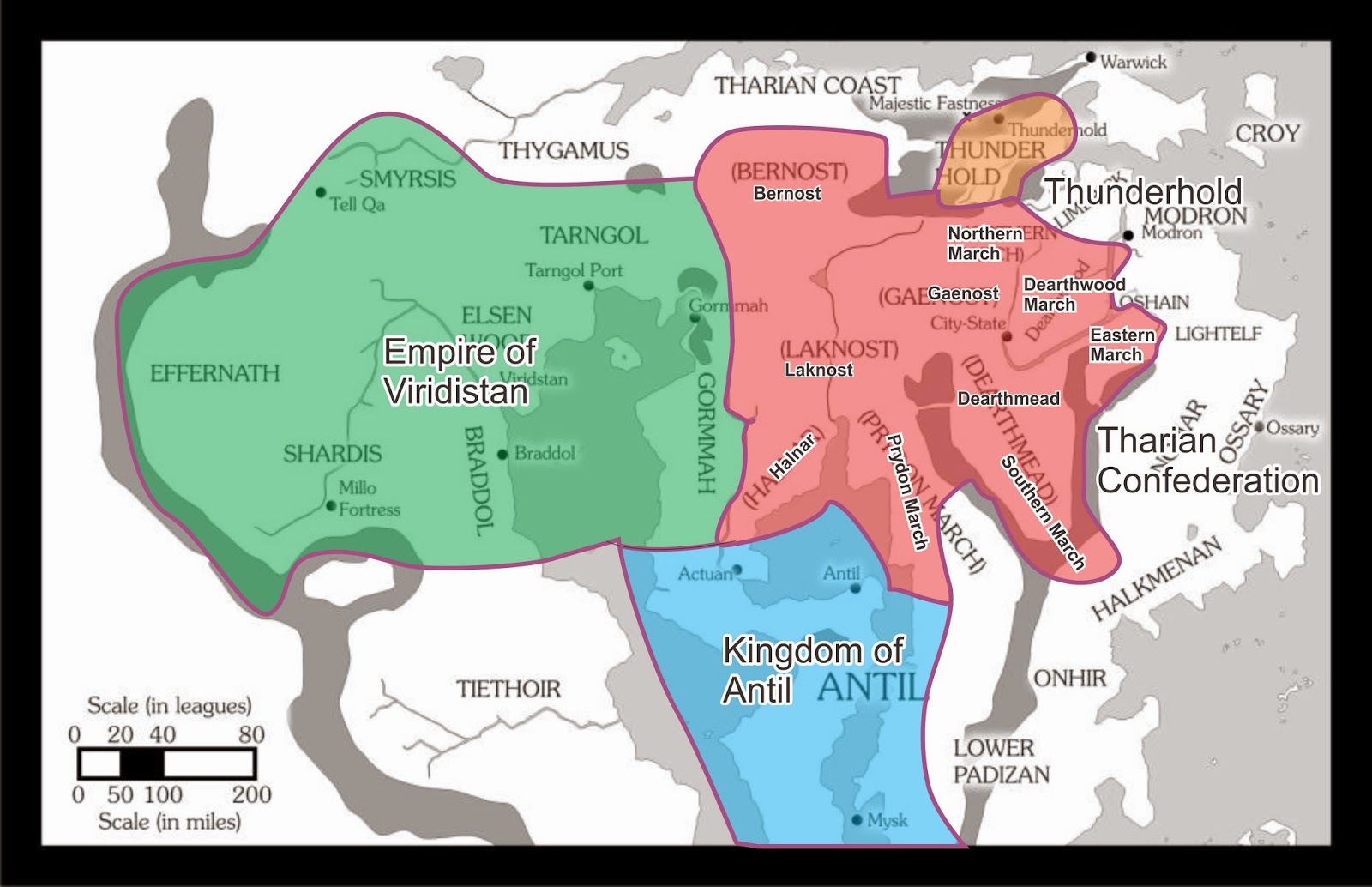 The settlement of the Northern March served as a model for Lucius' son Varius and his successors. Over the next hundred years, the Overlords used their personal resources to conquer the Eastern March, the Southern March, and then the Prydon March. Each additional conquered territory provided more resources to undertake the next conquest. By 4436 BCCC, the present day of the Majestic Wilderlands Supplement, the Overlord's power was far greater than any one clan or noble house. And now slightly exceeds the combined power of the clans and noble houses. The Overlords skillfully used land and titles in the conquered territories to divide the Senate opposition following the blueprint laid out by Lucius the Great.

A notable exception occurred during the wars with the Kingdom of Antil that lead to the conquest of the Pyrdon March. The resources of the Kingdom of Antil rivaled that of the Overlord. However Elessarians of Antil had deep divisions of their own centered around a rivalry between the House of Talsha and the House of Merovech. At the time of the war the House of Merovech suffered several reversed including the loss of the throne of the Kingdom. The Duke of Halnar felt that the Overlord Varius would be a better sovereign than the King of Antil. So in the middle of the war between City-State and Antil, he switch sides and swore fealty.

The Duke of Halnar and his allied noble houses were welcomed into Confederation as full members. The Senate welcomed the duke and his allies as they would bolster their power in respect to the Overlord. The remaining territory conquered from Antil was divided by the Overlord Various among his supporter and he created the Prydon March.

Among other things the original Judges Guild City-State had a lot of factions and there were numerous hooks for intrigue. Along with this the Overlord was not presented as a weak ruler. After reading the original, you left with the impression that the City-State was a wild place but the Overlord was the biggest baddest of all the inhabitants of the city. He was not weak and not one to cross.

As the Wilderlands of High Fantasy morphed into the Majestic Wilderlands, I kept the idea of a strong Overlord. To combine that with the stuff I developed about the Ghinorians, Tharians, Elessarians, and the Confederation, I came up with the idea of the marches being the personal territories of the Overlord. When I tallied up the number of all the settlement I assigned to everybody I found that the territory personally controlled by the Overlord slightly exceeded that of those controlled by the nobles. Which was great because that supported another detail of the original where half of the Overlord's army are his personal forces and the other half consist of his nobles.

I hope by going into this detail, it helps you as an example for when you want this type of detail for your campaign.

Wrapping up this post, remember that even as Lucius grand plan was working masterfully it could not paper over deepening fissures in Tharian culture. But before we get into that, I am going to layout the details of how the Overlord governs City-State and the Confederation in the next post. A lot of this should be stuff you can cut and paste with a few changes into your campaign.
Posted by Robert Conley at 12:43 PM

Thank for the insights into the setting and your world. From planning the world to developing schemes to modify/evolve the setting to the satisfaction that you can verify that it would be all actually be feasible. You've put an amazing effort into creating a viable world. Again, thank you for sharing.