Of Overlords, Kings and Barons, Building a Feudal Setting Part 8


Note: The Tharian Overlords derive their regnal numbers from the founder of the clan. So the first Overlord of All Tharians is the second leader of the clan named Halius since the clan's founding, hence he is Halius II not Halius I.

Dragon Empire
Ruled by the Prince of Caelam (present day City-State) as Overlord of the Dragon Empire. It was union of Elessarian and Ghinorian culture united to fight the demonic Viridians to the west and spread the ideals shared by the Church of Mitra and the Trehaen. It collapsed into civil war four hundred ago due to an age old conflict over who was considered an Ghinorian. Did one had to be born a Ghinorian? Or was a profession of faith in Mitra enough? The civil war opened the way for the Tharians to invade take over much of the realms. Caelam, now City-State of the Invincible Overlord, to the west remained independent as well as the southernmost Elessarians. 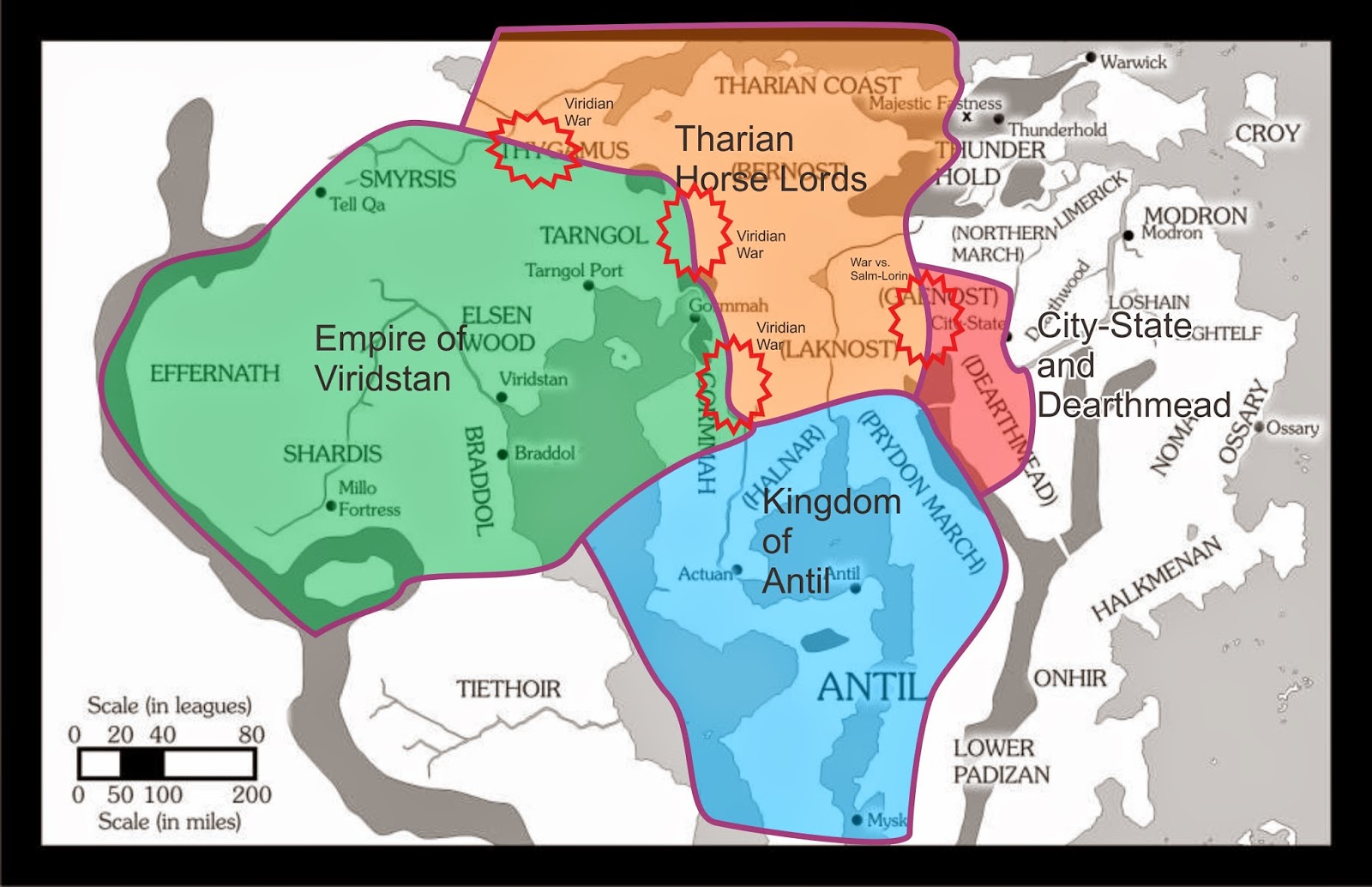 Three hundred years after their invasion, a hundred years ago, the situation for the Tharians was bad. To the south the surviving independent Elessarians organized the Kingdom of Antil and were poised to expand. Likewise the City-State of the Invincible Overlord was expansionist under the leadership of the Tyrant Mage Salm-Lorin. The most serious threat was from the west, the demon haunted Empire of Viridistan.

Background Continued...
After the conquest, the Tharians remained divided as numerous clans. Their territories the equivalent of petty kingdoms some large as a duchy with a castle and multiple keeps, and some as small as a single keep barony. By the 4330s, a hundred year ago, the Viridians mastered the art of combating horse nomads and started to absorb bordering clans one by one.

Clan Chief Halius II of Clan Bulwark, was at the height of his fame and was widely considered the quintessential Tharian of his generation. By 4338, even the most stubborn clan chief had to admit it was time to unite under a single leader. And that leader was Halius the Second who was proclaimed as Overlord of All Tharians.

What the clan chiefs didn't know was that Halius' son, Lucius was a true genius. That father and son deeply respected one another abilities. Halius realized how smart his son was early on. While he did not always understand why his son advice worked, he grew to trust it and acted on it. Lucius in turn respected Halius athletic prowess and like many others was taken by his father's natural charisma. While Lucius had his own charisma, he was wise enough to see that it was his father who captured the imagination of the Horse Lords. Father and son proved to be potent team and laid the foundation of an empire.

Halius was able to stalemate the Viridians with what we would call Fabian tactics by using the mobility of the horse. When Salm-Lorin of City-State allied with the Viridians, he sent Lucius to deal with the Tyrant. Lucius genius came into full flower during this campaign. At its conclusion City-State fell, and Salm-Lorin was dead. A grateful city, freed of the tyrant mage, proclaimed Lucius as the new Invincible Overlord of City-State.

In addition to conquering the City-State, Lucius defeated the Ghinorian Duchy of Dearthmead to the south of City-State. Lucius had neither the time or resources to fully conquered the duchy. So he accepted their surrender, installed the old duke's son as ruler, and had the new Duke of Dearthmead swear personal fealty to him.

Now with the resources of City-State behind him, Halius was able push back the Viridians and force the Empire of Viridistan to make a peace treaty respecting the independence of the Tharian Clans.

Halius ruled as Overlord of All Tharians much as he did as when he was just a clan chief. Using his wealth and charisma to either charm or threaten the other clan chiefs into supporting his reign. When he died, Lucius used the threat of the Empire of Viridstan to manipulate the Tharian clans into agreeing to make the position of Overlord of All Tharians a permanent one.

I freely admit this is all background was written because it interests me. It is important only that it serves as the foundation for the details that do come up in play. Has any of this ever come up during campaign? A handful of times. It generally when the players realize that the NPCs they meet are not just a bunch of stereotypes. That there is a reason for the power they hold and why they act as they do. When they start asking questions, answer often involves what I wrote above.

Is any of this absolutely required to run a campaign? Yes and no. In one sense it is required because as a referee you have to have a foundation on which to base your roleplaying of your NPCs. Now this foundation can be explicit as when you write out detailed notes on a setting, or it can be implicit which means you are drawing on what you learned about your genre's tropes and stereotypes.

Relying on implicit tropes and stereotypes works because thanks to the work of Gygax, Arenson, Miller, Heinlien, Asimov, Lucas, Spielberg, Tolkien, Leiber, Howard, and dozens of other authors and gamers they have become widespread. To the point where a referee can rely on people "getting" what they are trying to roleplay. So in that respect all that background detail I laid out is not required.

For me, I rather spell out for myself what I will be relying on. That means making notes and background info, much of which the players will never see. Because I ran the Majestic Wilderlands for so long over so many campaigns the notes started to pile up. Enough to... well.. to write a supplement.

Next time we will get into what Lucius setup to rule over the unruly Tharian Clans and the rebellious Duchy of Dearthmead.