Of Overlords, Kings and Barons, Building a Feudal Setting Part 9

There was a limit to even what Lucius could do in making a realm. The Tharian clans were fiercely protective of their independence. The belief as the chosen people of Mitra lead the Ghinorians of Dearthmead to attempt a rebellion for their independence and liberation of City-State against Lucius. Finally, the economy was only just beginning to rebuild from the fall of the Dragon Empire hit when the wars with Viridstan broke out. During the wars the economy collapsed and now only land had any value.

The Overlord Lucius hammered out a new agreement with the Tharian clan chiefs, and the Duke of Dearthmead. Together they would form a confederation where each member responsible for it own laws, religion, and military. Lucius would be granted the right to call up and maintain a military force to defend the realm. Lucius also would establish a judiciary where disputes between the clans along with the Duchy of Dearthmead would be resolved. And the clans and the Duchy of Dearthmead (the duchy only reluctantly) agreed to recognize City-State as the personal property of Overlord Lucius.

However the clans and the Duchy of Dearthmead imposed conditions of their own. First Lucius had to split off a new clan from Clan Bulwark and relinquish all the conquered territories (Haghill, Darkfield, Gaehill, etc) of City-State (but not the City-State itself) to the new clan. Second, Lucius had to recognize the right for the clan chiefs and the Duke of Dearthmead to organize a Senate. The Senate being a court in which any dispute between the clans or the Duke of Dearthmead would be resolved.

Before the Virdians wars, Tharian titles revolved around the hierarchy of the clan. You had the Chief, his heir the Tanist, along with his personal men the Housecarls. If the clan had subordinate clans, the chief of the leading clan would be known as the High Chief. The Tharians viewed titles like baron, duke, count, etc as foreign affections and not worthy of a Horse Lord.

But now after the war and the formation of the confederation, the Tharians were dazzled by the wealth of City-State and of the Ghinorians. Halius and then Lucius made sure the loot won during the war was liberally split among all the allied clans. There were a few conservative holdouts that disdain the appearance of foreign luxuries however within a generation most of the elite Tharians developed a taste for the latest from City-State.

A more serious issue was the pre-existing system of Ghinorian nobility found in City-State and the Duchy of Dearthmead. At first it looked simple. The conquered territories outside of City-State were treated as original Tharian conquests. The pre-existing nobles were killed or exiled, the Ghinorians reduced to peasantry and the land distributed among the members of the new clan, the Gaenosts.

However that option was not viable for City-State or the Duchy of Dearthmead. Lucius saw that the Ghinorian nobility had trouble relating to the clan hierarchy of the Tharians. So Lucius started creating titles for the various clans and their members. High Chiefs were given titles of Duke or Counts. Chiefs were given titles as barons. The housecarls were recognized as a knights. By the end of Lucius' reign, there were five dukes. The Duke of Bulwark which was given to Lucius' heir, his son Varius. The Duke of the Laknost and the Duke of the Bernost which were given to the two most powerful Tharian clans. The Duke of Gaenost which was given to Lucius' brother when he was forced to relinquish the territories of the City-State as the price for the creation of the Confederation. Finally the Ghinorian Duke of Dearthmead. 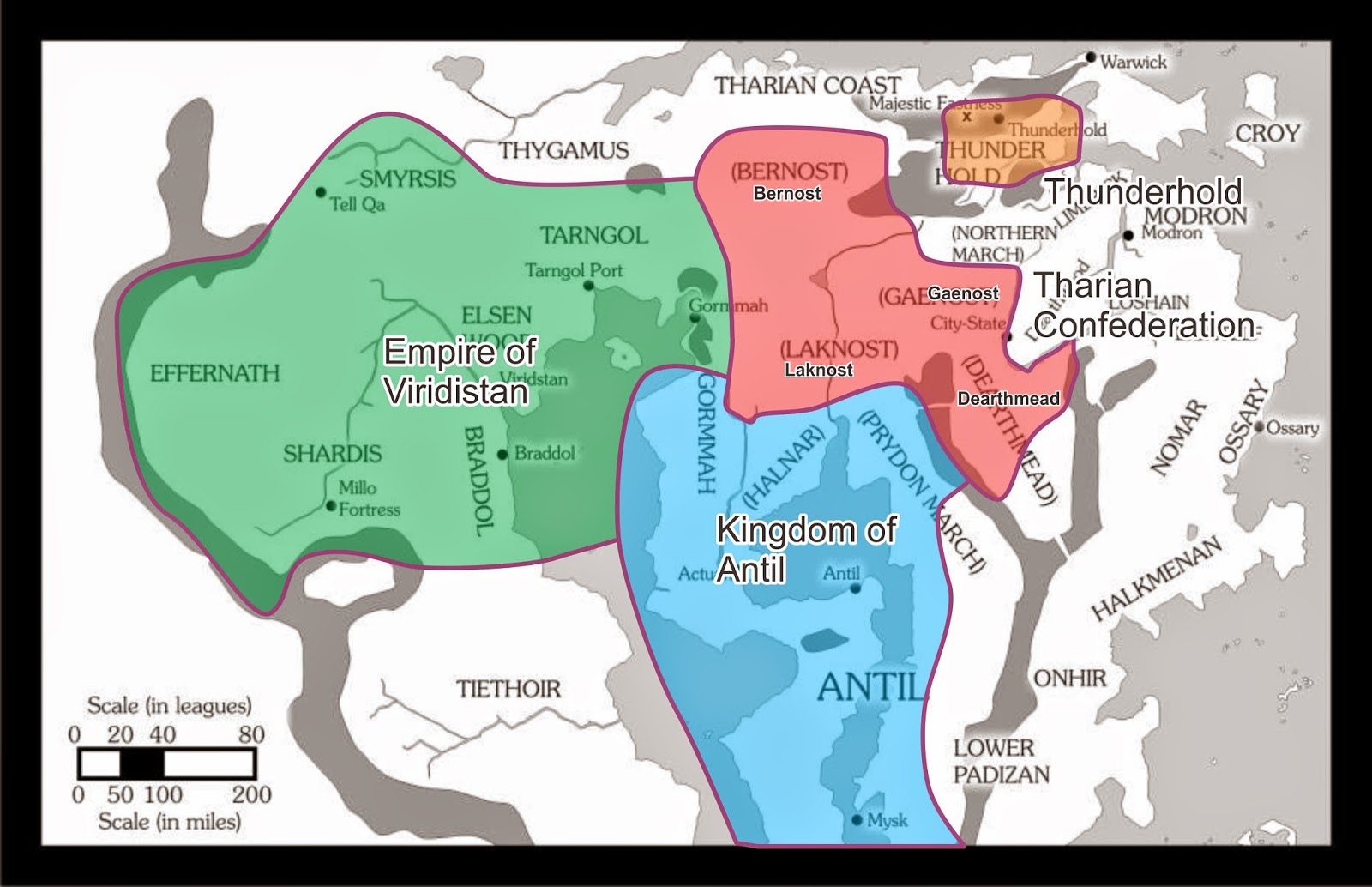 It took a generation for the noble titles to sink in among the Tharian clans, but in the end it was one of Lucius more successful policies. It allowed the elites of the two cultures, Ghinorian and Tharian, to relate to each other. But it was also first crack in Tharian Society that led to the civil war of the present campaign.

The newest major clan, the Gaenost, were the first Tharians to really experience the full sophistication of Ghinorian culture. As the Tharian swept into the Dragon Empire, four hundred years ago, the lands they conquered were totally revamped in favor of the Tharian traditional focus on the raising of horses and livestock. In this they were aided by the fact that the lands were devastated by a generation of civil war.

With the Gaenost, the land was conquered in a brief war. While the conquest was devastating for the old Ghinorian nobility, for the common folk it was the same situation but with new masters. The Gaenost took over manors and estates along with the titles that were associated with them. The Bondbuyers learned the more sophisticated practices of Ghinorian merchants. These changes started to drastically alter the original Tharian culture of the Gaenost. And over the next hundred years the changes would spread westward until even the most conservative Tharian clan was affected.

If you play my campaign, your first impression of the Tharians would be that they are barbarians who ride horses with feudal titles along with a bit of a temper. As you interact with them you will find that they I play Tharian NPCs off of several different stereotypes. The stereotypes centered around the above, that Tharian culture in the midst of a great change, and they are struggling badly with the change.

This conflict is central driver of the events behind City-State civil war. Around 1990, I developed this in part to explain why there was a Temple of Set, the Hellbridge Temple, in the middle of City-State when the majority were Ghinorians worshiping Mitra.

There is a large faction of Tharians who believe that the Lars of their ancestors have failed them, and that only by following Set and his Laws of Maat that the Tharian people can be restored to the glory days of clan and horse.

I have not mentioned the Elessarians aside from those who have been conquered and are peasants of the Tharians. They joined later during the reigns of Lucius' successors. You may have noticed that the final arrangement of Lucius with the clans and the Duchy of Dearthmead meant that Lucius' personal power can not compare to the combined might of the clans and the Duchy of Dearthmead.

Lucius has a plan to deal with this. And that plan is what confirmed his title of 'the Great'. We will cover this along with form of City-State's feudal structure took after the reign of his successors.
Posted by Robert Conley at 3:04 PM