What it took to publish Blackmarsh 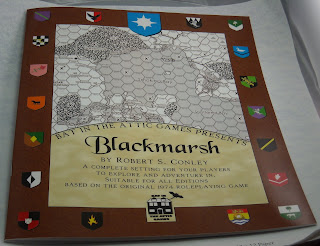 January 20th
Sent email to John Adams offering him a setting. Noted that the only compensation I wanted was credit and for the entire setting to be under the OGL.

January 23rd
The other Delving Deeper developers like the idea.

Beginning of February
It took a couple of days to coordinate schedules but we finally manage to chat. Agree it was to be digest size and no more than 24 pages plus one 8.5 by 11 map.

Middle of February
Decide to use the Blackmarsh map after talking it over with Tim of Gothridge Manor. Due to needing this done by the end of March I didn’t want to draw another map. So the final choice came down to between Blackmarsh and The Outdoor Map. Tim thought Blackmarsh looked more interesting.

February 20th
Rewrote history, the first version was based off of the Greyhorn Setting I wrote for the live-action roleplaying chapter I ran. While I could made it work it didn’t have the gold rush feel I wanted and frankly I wanted something unique to Blackmarsh. This is version 1.

March 5th
Completed First Draft sans rumor table, city key, and Castle Blackmarsh map. This is version 2. It had Stat Blocks. Sent it to John for initial approval along with the question do I include stat blocks or not?

March 5th
John and the DD team likes it and tells me to axe the stat blocks. Yay!

March 6th
Went through and edited version 2, got rid of the few Stat Blocks I had and saved it as version 3.

March 7th
Sent it to Tim, Started working on Version 4 with the City Stuff added.

March 12th
Get the edits back from Tim saves at Version 5, review edits and make a handful of changes and saves it as Version 6.

March 22nd
Finish City, and Rumors in Version6. Send it to Tim again. Also sent it to Dwayne and the Rusty Battleaxe for edits and comments. Finished the City Map.

March 24th
Tim and I get on Skype and read out loud the entire document, applying edits as we go. This becomes version 7.

March 26th
Apply the edits sent in by the Rusty Battleaxe saves it as version 8.

March 27th
Layout day for the digest version.
When through my purchased Stock Art and began picking out suitable pieces. Mostly landscapes. Created a new art subdirectory with a subdirectory for each vendor. Copied the picked pieces into each vendor’s subdirectory so I knew who to credit.

Converted all at to CMYK 32-bit TIFFs important for PDFX/1a compatibility. Otherwise the RPGNow convertor will kick in and I wanted to avoid that as I am pretty sure it is the source of why my art and map were half-tone in the Majestic Wilderlands.

Created the digest title page which is also it’s cover.

Did the layout for the digest size version. Had to mess around with the font size and the OGL license text font size to get everything into 24 pages.

March 31st
Finished the Letter size PDF it is 15 pages compared to the digest’s 24 page. I had to leave the last page blank per Lightning Source specs.

April 8th
Print PDF clears processing and now available for order. I could have released then but that not a good idea until I see for myself what it looks like. So I order two books for myself costing 11.45. Shipping doubles the price.

April 15th
286 gamers downloaded or bought Blackmarsh. Hopefully are enjoying reading it and getting some great ideas for their campaign. 50 gamers downloaded the Blackmarsh SRD at batintheattic.com. Note if you ordered the free PDF off of RPGNow it has the SRD.
Posted by Robert Conley at 6:00 AM

Love the step were you two read the text out loud to each other over skype! Needs to become an OSR standard cause it is just too cool.

Cool Rob. Thanks for posting this. It's nice to see what goes into getting something self-published. In particular its great for people like me who hope to do their own self publishing in the future.

This is a really great post. Thanks for sharing it.

What a labor of love.
Thanks for Blackmarsh. I will be using it with DD for certain.

Happy to be a part of it. I'm looking forward to seeing the final product. Congrats again!

This was the right setting at the right time. I am just about starting a LL campaign using Stonehell Dungeon.
The only thing missing was a suitable barebones setting.
Love it Rob!

My name is Catherine Meyers; I work as the admin of a web and blog directory with page rank 5. I have to say, I enjoyed reading the process to "create" Blackmarsh, also the story of Bat in the Attic is great, Good job! That is why, I would love to have your blog in my directory, that way my visitors will also visit your web and get to know of your games.
If you are interested in this link exchange, please let me know.

Good luck with Bat in the Attic!

@Catherine, feel free to link to Bat in the Attic.

thanks for sharing, very enlightening :D