From the Attic: Experience Points Rules

Around 1983 I realized that I didn't like XP for gold or magic items. By then I ran several groups through the Majestic Wilderlands and realized that what fun about my campaign was the players building a legacy for themselves. Grubbing after gold and magic items specifically for XP was a distraction. Plus while I wasn't a Monty Haul referee I was never stingy for Magic items either. Plus I was one of those referee who allowed players to shop, within reason, for magic items. Particularly at the Sorcerer's Supply Shop in City-State.

Eventually I jettisoned xp for gold, and xp for magic items. I replaced it with an Roleplaying award. The system was simple, I set some factor for the campaign. Typically between 50 and 100. I rate the players on a scale from one to 5 as to how well they "roleplayed". Then use the formula of Base Factor times level time rating. That coupled with the xp from defeating monsters and enemies plus any prime requisite bonus is what the characters got for XP.

Of course the immediate question comes up is what is good "roleplaying". Then I defined as being in-character, reacting to the various situations as if the character was really there. If the player came up with a nifty scheme or pulled off a great plan then I award a 4 or 5.

Today I still use the same system for awarding xp. I still look for player reacting in-character to situations in the game. But now I also look for how the players is accomplishing his goals. When they hit a major milestone on their plans I give them a 5. While events are swirling around them in my campaign I don't really care what their exact plans are. I am not dictating a story here, I want the players to make their own way through the Majestic Wilderlands. So it may be that the goal of a player for his character is to become head of the thieves guild. Then through chance we get into into roleplaying about a princess the character fell in love with and the character wants to marry the princess. Now I look to see how the players is progressing with both of those.

So what happens to Gold and Magic items? Well they are just an in-game means for the players to accomplish their goals. Players have their characters seek them for their value in accomplishing whatever they want to do. Gaining treasure allow them more resources to accomplish their plans which boosts their roleplaying awards.

I no longer charge for training costs. Instead the players can spend up to a 1,000 sp per week to gain 1,000 xp. Since I adapted the harn price list and a silver based money system, a 1,000 sp is a substantial sum. For straight classic D&D I would go with a 1,000 gp per week. What happens is that if the players are little bit under they will spend time training between sessions. Also when the magic-users are copying spells into a spell book (1 day per spell level) the other characters usually train. I also jettisoned level limits for demi-humans. Instead the limitations are social and cultural.

Below is the original typed set of rules I used to implement my Roleplaying-experience system. 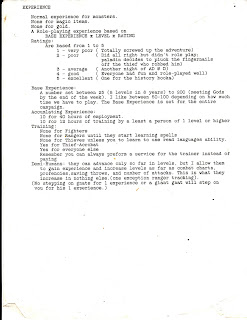 Labels: from the attic, Legacy DnD

Why didn't you mention the gnat rule in your post? It seems to be crucial. ;)

Back in the old days I gave only xp for monster and magic items plus a bonus. A bonus I just decided upon after the session. This worked as for the most part there were only two players.

Xp for gold is totaly insane, reward for reward? Nevermind. What is gnat rule?

My opinion is that all retroclones are usless.

All dnd like gaming are weird, leave it and toss it to the trash can.

From my point of view the whole oldschool gaming and retroclone rule designing are completely unnecessary. Because there are lot of games (for example odnd) and you don't have to publish n+1 version. Why don't you redesign the original dnd? Why fun playing with these clones?

If that's your actual opinion, perhaps you shouldn't be reading this blog. I will reciprocate by not reading yours.

This sub-system is really interesting, I might use something similar to reward achieved goals.

roleplay:
Why don't you read blogs and forums related to the game style of your choice instead of cursing D&D and OSR? I am sure if you spent half that much energy on creating WFRP and Ars Magica modules, you have finished plenty of them. You are wasting your time.

So for this system are you doling out individualized XP or are you rating the group of players as a whole?

Technically individual, but most of the time stuff winds up being a group effort so everybody gets the bonus.

Thanks for the advice. I made Warhammer adventure, but nobody cares and for Ars Magica it is hard to make adventures, except for sandbox settings.

If I'll have more time besides abusing oldschool I will produce useful things. :)