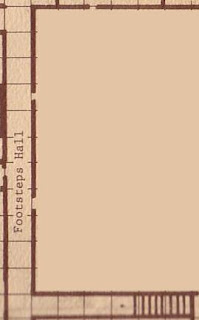 After carefully checking for traps and not finding any they opened the door to reveal the Great Hall of Tegal Manor! Amid six gigantic pillars were two banquet table each with a dozen skeletons One were dressed in blue tunics and the other Red. (I used my Official Guards, Red, and the Official guard, blue, that Tim of Gothridge Manor gave me). 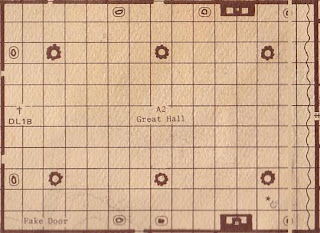 Hunter the Halfling thought to be funny and chucked rocks at the skeletons. When it got up his next throw beaned it in the head. At this point ALL the skeletons got up and marched in formation to the party. As they were wielding spears the second ranks was able to attack and the halflings fell after being impaled by a half dozen spears.

Hemidell the dwarven runecasters quickly cast after Hunter's fall and activate his run of fire and casts a fireball in the midst of the skeleton leaving only two. They were quickly dispatched. Fortunately despite multiple stab wounds Hunter was only unconscious and was healed after a half hour of rituals.

Investigating the room they find an active teleport. After almost being pushed into the circle by Hazar, Hunter and Alaghazar, the human Thothian Mage, decided to try it anyway and promptly disappeared from sight.

Hazar wanders away from the circle and looks at one of the statues and fall down screaming as he is blinded in one eye. Actually one eye was made extraordinarily sensitive to light to the point he had darkvision in that eye. But with it being daytime who knew the difference. Janus had a Remove Curse handy and lifted the blindness.

After evading a few traps scattered about the hall, Heimdell found a secret door behind the tapestries hanging from one end of the hall. It opened into a strange courtyard open to the sky. Janus uses Detect Magic spell to determined which one are magical. Of course then Hazar goes up and investigates each in turn. The first gave him a prophecy about the prices that yet to be paid and the choice that will be made. Janus recognized the voices of being of the god Silvanus. The second unleashed a Geas on Hazar. He must seek and destroy the Night Bride Coven or die!

Investigating the north door Janus, Heimdell, and Hazar discovered a corridor that connected back to the Torture Chamber. Hazar happily filled in his map.

Meanwhile Alaghazar and Hunter found themselves in a giant rat infested maze. Including rats of unusual size (Monstrous Rats from S&W). They were easily dispatched and they found several holes leading up back to Ground Level. 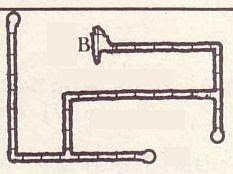 They emerged in a bedroom with two more giant rats which were quickly killed. They looked out the windows and saw a courtyard with several statues. They looked at the next door which opened up into another bedroom. However there was strange statue in there and the floor was badly corroded so they decided to leave that room for later. 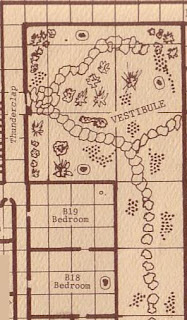 So here it was ended for the next. I never ran Tegal Manor before despite owning it for nearly 30 years. It is definitely the original crazy ass funhouse dungeon. I really like how the map had notes all over place and I think it is a style that can be explored more. James at Grognardia had a recent post on the topic.

The room descriptions are really sparse and all the statues are randomly rolled on the startling statues table. For example the bedroom at B19 is written like

Refereeing this meant I had to combine the map description with that short entry to come up with something interesting. It is a challenge but a lot of run. I don't if it would be viable as a commerical product, you paying good money not only save time but get a different vision of how an adventure can go. The authors simply can't communicate in such as terse description.

An exception perhaps when you are trying to do something of a grand scope and Tegal Manor is certainly grand.

But for the referee preparing his own material I think the terse format is all that is needed. The rest can stay in your head to use as needed.
Posted by Robert Conley at 6:00 AM