Two weekend ago I had another session of Swords & Wizardry at the Gold Star Anime. I didn't post about the previous sessions. To recap, the party killed the Minotaur in the Maze. Janus the Elven Cleric died when Hazar foolishly shoved the lid off of a tomb and poison gas flooded the room. The party decided to take Janus to the wading pool in the level above and after Hazar promised to pay the "price" Silvanus resurrected her. The party cleared out the rest of the temple. Discovered a passage to a section that was ruled by a demon. Killed the demon.

On the way they encountered Leon and Typhon running for their lives from a horde of Orcs. Whatever tension existed from before were put aside as the entire party was engulfed by a horde of on rushing orcs. In two successive waves nearly 50 orcs were brought down through blade, and spells.

Unfortunately Typhon's Orc henchmen was killed by Hunter the Halfling. Fortunately for the Hunter Typhon was unconscious due to a tremendous hit by an orc shaman's magic missile. When he was revived his grief knew no bounds. While the party mouthed platitudes how it was an accidental hit. Typhon noticed that his beloved orc head was taken cleanly off the shoulder (Hunter rolled a nat 20). He secretly vowed vengeance against the unknown perpetrator.

Rob Note: Back in the day I would have rather uptight about the "unrealistic" result of a party taking out 50 orcs. This time around I just go with the flow. I have come to even appreciate how even mid level characters can feel like heroes overcoming great odds. The key elements are the powerful low levels spells like sleep and fireball. And the fighter ability to get 1/attack per level against 1 HD creatures or lower.

They came back to Oakwatch Keep and quickly refitted. Typhon and Leon had other business so made other arrangements (the players had to leave early). They spent a week training and refitting (Hazar was learning to be proficient with a long sword from Hunter, Heimdell was recharging some runes to replace the ones he expended, and the rest buying charms from the Temple of Thor).

Near the end of the week, while eating in the Tavern, the party talked with a certain Sir Runic Rump who mentioned that he had a manor to sell as he was down on his luck. (At this point I show a fancy deed I created and had printed). The party was impressed and Hazar decided that the Manor needed to bought. They negotiated a price of 20 crowns (6400 silver pieces). Heimdell was suspicious so he asked around and found out that four other parties had bought the same deed but only to return and demand a refund which Sir Runic Rump gave them. One party only had half of it's members. Even after being informed Hazar was determined to close to deal.

The next morning they left Oak Watch Keep and headed down to the Estuary of the Roglaroon. After crossing it they handed to Tegal Manor (I shifted it location for this campaign). 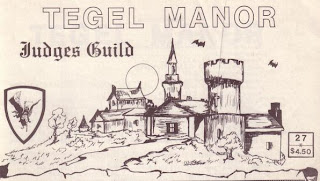 To say the place was huge is an understatement. 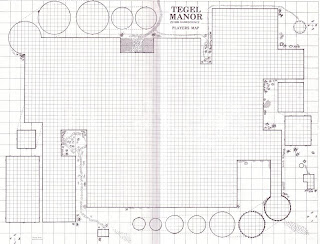 So they poked around the outside noting the strange statues that seem to be common. They investigated a gazebo on the northeast corner of the house. 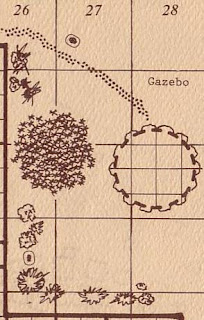 However they got the first inkling that something was seriously wrong with the manor when they peeked into a window and saw a lounge room and sleeping on the couch was a MINIATURE RED DRAGON.

Taken aback Hazar decided to see what this was about and went around to the main entrance where the Master Foyer awaited them. When they opened the door they saw several pillars and the walls adorned with paintings of the Rump family. Hazar went in followed by Alaghazar. Hazar started to go the pictures on the west. When the two saw a two headed demon walking towards them. Alaghazar immediately left and shut the foyer doors leaving Hazar inside!

The demon won initiative and went up to Hazar and demanded his cloak. Dumbfounded, Hazar fumbled and handed it over only to have it fall to floor as it passed through the unsubstantial form. The demon was really only a ghost. The ghostly demon wailed and cried and stomped off in a huff disappearing into a wall.

After this Alaghazar and the rest of the party came back into the foyer. After a few sharp words with the Alaghazar, Hazar went to investigate the painting at 49. It was a pictures of a Rump in farmer's clothing wielding a scythe. As he approached the man in the painting turned and planted the scythe in the middle of Hazar's chest! Cursing his luck he backed away and proceeded to throw daggers at it until it was destroyed.

Laughing Alaghazar went to look at the picture in 40. Labeled Rushrat the Rainmaker the party saw a miniature rain cloud form over Alaghazar and started raining on him. It followed him wherever he went. Janus decided it was a good time to cast Detect Evil. From the spell she learned that beyond the east door there was a great evil. Janus also found by focusing on the painting she could sense which ones were baneful.

After hearing about the great evil Alaghazar decided to cast invisibility on himself. Almost immediately the rest of the party burst out laughing as they could clearly see the rain outlining his body. Irked he slugged Hazar, and stomped off becoming visible again. 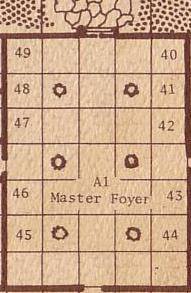 The party decided to see what behind the east door. Opening they saw a dark corridor stretching 50' to the east ending in another door. When Hunter stepped into the hall the entire party almost ran in terror as a blood curdling scream was heard.

Rob Note: They moved their miniatures into the hallway and when they did so I let out a scream as loud as I could. I think I almost give Big Jerry a heart attack and the rest of the players looked ready to bolt.

Investigating these room revealed chambers of horror. To the south was the horrific Room of Fear. Painted in black and lined with horrible paintings it caused nearly everybody who looked in to be overcome with nausea and vomit. After discussion it was decided to lob a fireball into the room destroying the paintings. Investigating the Cells to the north found little of value except a door to the north. To the south the bedroom held a strange darkness in SW corner. When shot with an arrow it withdrew into itself and revealed another two headed demon! Janus stepped forward and called on Silvanus. The god's holy light leaped from the holy symbol and revealed the demons for an illusion. 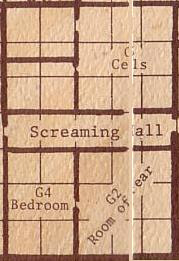 The party then decided to look beyond the eastern door and the worst room yet was revealed. The torture chamber of Tegal Manor! Over the center pit were barbed iron chains that writhed of their own accord. Hazar went to investigate and barely escaped when they attacked him. Janus had a Protection from Evil 10' radius and stepped to the chains which were repelled by the aura of magic. 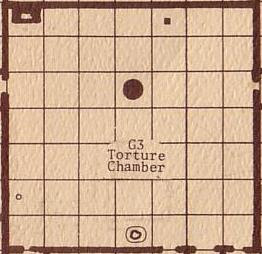 There was a hole in the SW corner that was three foot in diameter. It looked to be dug out and a strong animal smell was detected. On the North Central wall a trapdoor with a ladder going down was found. While the party was deciding what to do Hazar climbed down. When he reached near the bottom he was grabbed by the ankle and thrown about the room. (B in the map below). The party quickly scrambled down to help him dispatch an Ogre who leaving down there amid the bones of the Torture room victim which were thrown down there. 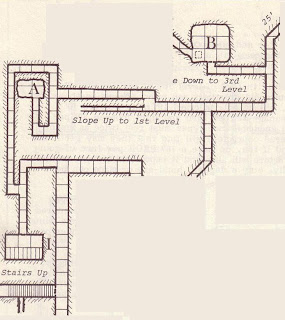 The party then decided to investigate the dungeon they found. Wandering around they found nothing at A. However at I they found six crypts. With Janus Detecting Evil the party positioned themselves as the lids were shoved off. Wights and Skeletons emerged but the party quickly dispatched them.

Tomorrow Part II
Posted by Robert Conley at 6:00 AM

With ErieCon on the next available weekend for me, it will be unfortunate that I shan't be around for our usual monster destruction and sheckainery.