Miniatures are a tool, you can over use them. Verbal descriptions are a tool. Some DMs are good at only using one, others can combine both to create a superior game session, others are poor at both. The key point is to figure out which combination of techniques works best for you and then hone them.

For myself I use miniatures with dry erase board and a minimum of props. I have a lot of standard stuff, (orcs, men-at-arms, undead, etc) that are readily accessible. For example I a set of what I call "official guard figures". They always represent city guard, noble retainers or other military forces, 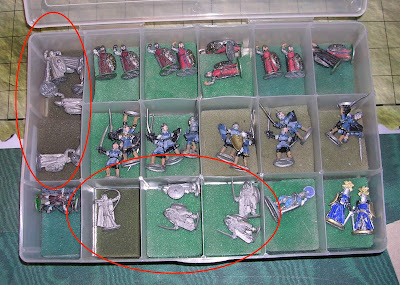 The same for the props I throw onto the board after drawing the room. I use props because the ones I found setup faster then me drawing it. I tried using Dwarven Forge stuff but it took long in the setup department and too prone to jostling and then falling down.

Other DMs have their own techniques ranging from no miniatures, miniatures for purposes of marching order, to the full blown Dwarven forge setup. The quality of their game was independent of what technique they used. In short DM wer bad or were good regardless whether they were verbal only, or used the full dwarven forge experience.

However if a DM was verbal only, or a DM used Dwarven Forge there were certainly dos and don't for each technique. For example most Dwarven Forge DMs typically had the most detailed sections prebuilt and covered them until needed. Using only standard pieces for stuff built on the fly. Good verbal DMs are methodical and well organized in their descriptions and made sure each player described clearly what and where they were doing.
Posted by Robert Conley at 10:07 AM

I like using miniatures a lot. I actually got into rpgs through wargaming, and have been painting miniatures since 1984. I've never really understood the aversion that a lot of gamers have towards minis. But for me, painting and using miniatures have always been one the parts of the hobby that I enjoy the most!

Funny thing is, since I started gaming - and there goes 20 years - I NEVER used minis for anything else than to represent marching, if anything. Most of the time the players were represented by pencil marks in plain papers, and nothing else. But I had a lot of painted lead minis (not pre-painted, I did the honors), mostly because when I have a new game at the table, and I say "a Wight strikes at you", and then he retorts "a WHAT?!", I can get the right mini, put at the table and say "here, THIS strikes at you".

I don't even use miniatures in war games. Cardboard with an icon serves as well - in fact, better, since I can stack chits on it; which can not be done with miniatures.
Miniatures are entirely fluff. There is no use which could not be performed as efficiently with drawings or coins or the like.