Packing it in with the Majestic Wilderlands Part 2

A couple of days ago Timeshadows asks

Yesterday I answered the first question. Now to answer the "closely packed" portion of the question.

When you read history there are many factors that come into play that cause the events to unfold the way they did. There are lot of competing theories over which are the most important. Some believe in the Great Man Theory others believe that history is a product of environment. My personal opinion that everything is important. Remove one individual decision or one piece of the environment the outcome, given time, will be vastly different.

One of the most important factors of the environment is geography. For Timeshadow's question the aspect of geography we need to look at is the shape of the land. Consider two places from our history, China and Europe. 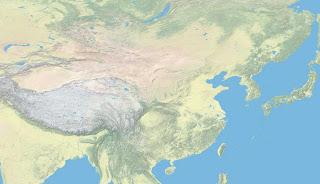 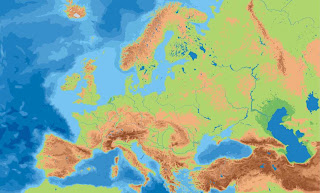 China doesn't have any real internal barriers. Instead you have to far to the south (Vietnam), to the West (Himalyas, Tarim Basin), and the North (Siberia) before you find anything that hinders the expansion of a civilization. As a consequence China's history reads as a series of great states Chin, Han, Song, Mongols, Ming, Manchu, PRC. There were period of significant divisions like the Three Kingdoms and the Warring States. But the geography worked against them being lasting divisions.

Europe in contrast is divided into numerous Peninsulas, interior basins. It has large mountain ranges dividing Europe into distinct regions. Even the North German plain which stretch from France, the Low Countries, Germany, Poland and finally to Russia is divided by numerous and large rivers that act as barriers.

Europe saw the Roman Empire that unified much of the Mediterranean and Western Europe. The barriers could be overcome by the will of the Great Mens of the time. But most of the time the geography of Europe cause regions to develop their own identities. In some places down to the point where areas the size of a US County or Metro area saw themselves as separate from other similar size regions only a few miles away.

Let's look at the Wilderlands. The maps show the mountain ranges as dark gray and the important rivers. 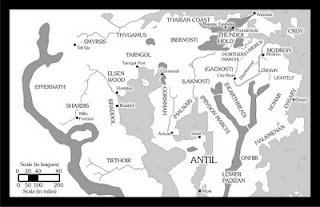 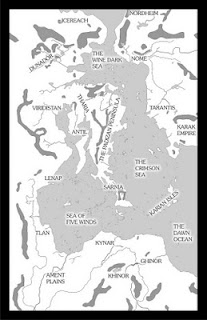 To me the geography looks more like Europe than China. The Padizan Peninsula (the bottom map) is even more broken up into distinct regions. Hence the reason why when I wrote the history of that area we see so many small yet distinct states.

If you use these ideas while creating your setting, you will have a plausible reason for all the little kingdoms and realms you want.
Posted by Robert Conley at 6:00 AM

I have scores of other questions, but to be fair, I'll have to read your Majestic Wilderlands so as not to ask questions that are perhaps answered in that product.
--If, after doing so, I cannot find the answers, I'll come back and ask them again on this thread.

In any case, this sequence of posts has proven interesting, and as usual, your maps are lovely.

Its great you applied that to your setting. I'm a fan of seeing geographic consistency in how the civilizations developed.

Thanks for the Maps!
Great job :D