From the Attic: Alternate Hommlets

Back in the 1990's I rewrote the Village of Hommlet for use in GURPS. I even did a layout, printed it out and had it in a Binder.

Most of it was restating the NPCs, redoing the treasure and money using the Harn price system. But I did add a plot element to spice up the in-town adventure.

32) TENTS AND WATTLE HUTS
Some dozen temporary shelters are along the edge of this corpse of trees. They house ten peasant laborers and families. They are the workers constructing the castle. A few villagers also work on the castle, putting a half-day's work every week.

Currently there is mounting tension between the workers and the villagers as the workers attempted to erect a tent to serve as a pub. The resulting protest from Ostler Guntram forced the Braumeister not to sell any more kegs of beer or ale to the workers. One of the workers is currently in jail because he tried to steal a keg from the Braumeister.

The Workers do not want to go to the Welcome Wench because the villagers have made it a unfriendly place for them to visit. Recently a spate of vandalism has hit the village the works are being blamed for this.

One of the workers, Rodolf, is working for the slave lords spying on the construction. He is currently trying to enflame situation as much as he can. He was the one that did the initial vandalism and was able to incite some of the workers to join in.

Roster:
Rodolf Labourer and Agent of the Slavers, 34 years old

This is one of the characters I created for the GURPS version. In my version it wasn't the Temple of Elemental Evil that had spies in town but rather the slave lords. 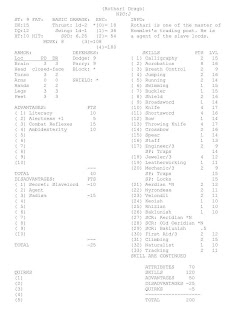 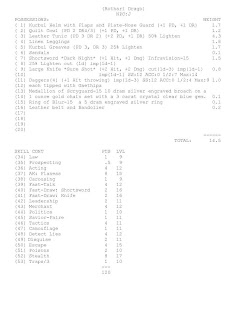 Labels: from the attic, GURPS, Inspiration