My youngest is 5 years old. I was helping his older brother put together a school project and he wanted to do a project too. One of leftover was a big sheet of yellow posterboard. So he took and went away to his "project". An hour or two later he returned with this. It hard to take a good clear picture of a large posterboard so I annotated it. 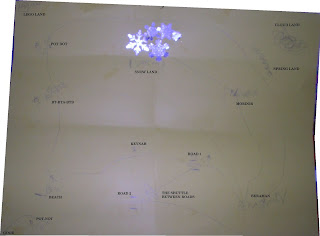 The title of the map is Lego Land. Here is his account of who lives here.

Cloud Land
Where the clouds are.

Mordor
Where the really bad people are. Note his older brother has developed an obsession with the Lord of the Rings so the youngest been getting an education on Tolkien lately.

Beraman
This is a sandy place where the Bionicles lives. I think he means Baramanga.

Road 1
Where people take off and land.

Road 2
Another place where people take off and land.

The Shuttle between roads
Taking people between the two roads.

Keynah
Riding on her motorcycle. She has special powers.

Pot Not
Still another monster village

Good
where all the good people are but nobody sleeps there

I hope you enjoyed this as much as I have.
Posted by Robert Conley at 6:00 AM

Great Map! You have some competition in the Conley household now.

Very cool; who would have guessed that Mordor was in Lego land? :D

Can we expect a Mordor version of this soon: http://www.youtube.com/watch?v=fIXByCAIzos

That is really awesome. I had a similar experience with my 4 year old daughter: