More Scourge of the Demon Wolf

Ten died. They were mauled beyond recognition. The Baron sent his huntsmen to kill the beasts and for a fortnight they tramped across the countryside. Between their whoring and drinking they killed twelve wolves, parading their skins through the village. They were hung on poles as trophies of victory. Then they left, the beasts slain, the village saved… so we thought.

With the priest's help I wrote a report to our liege, the Baron of Westtower. My report ended with,
There will be no harvest until the beast is slain and the killings stopped.

The Beggar Camp - The Beggars are wandering Tharian horselords who lost their horses or committed dishonorable acts. 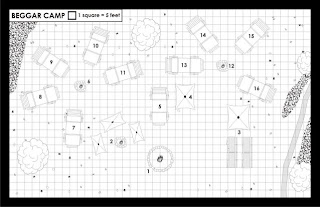 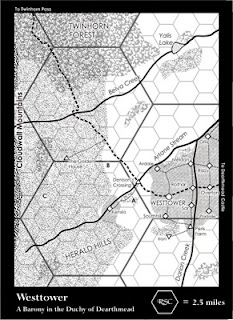 Great looking maps Rob. Now get to writing the adventure. Looking forward to what you come up with.

Cool maps, and an even cooler set-up, very evocative.