What the best for gaming in the Third Imperium?

Jeff gives his recommendation for what to get for gaming in the Third Imperium.

I heartily agreed with his choice of the Traveller Classic CD-ROM from Far Future Enterprise and his specific recommendation of using the Traveller Book and the Traveller Adventure. At $35 it is an excellent buy-in.

So you get that and decide that now you want to go down the rabbit hole? I got some advice for you then. See I went down the Traveller rabbit hole back in 1980 starting just after High Guard was released. So I have some experience with this stuff.

My recommendation after getting the Classic CD-ROM is as follows

I heard good things by BITS and Avenger but never bought their products. Just wasn't the right time I guess. Martin Dougherty right good stuff so if you seen anything for sale by him snatch it up.

The order is based on quality which means to me the best gaming for the dollars you spend. Remember most 3rd Imperium stuff is interchangeable regardless of ruleset. GURPS Traveller and Digest Group stuff is perhaps the best at fleshing out the Third Imperium setting. The problem with MegaTraveller and many other Traveller Product is that they suffer from a narrow view. You get a intensely detailed slice of a particular topic and has limited application to the rest of the setting. You have to wade through a lot of stuff before getting to the few bits of gold nuggets. In short Digest Group and GURPS Traveller are just better written and better made.

So how far can you go down that rabbit hole? Let's check it out. 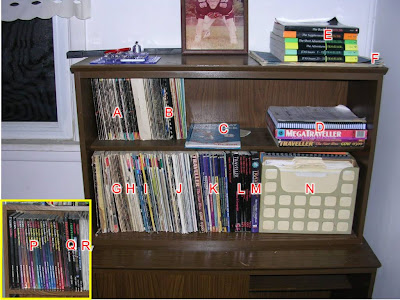 A) Classic Traveller booklets including Journals
B) Gamelords, Paranoia Press, and other 70s/80s era third party Traveller Companies.
C) My youngest likes this book
D) A pristine MegaTraveller Box, an extra New Era, and a printout of the MongTrav playtest
E) My Classic Traveller Reprints
F) My Azhanti High Lightning Maps
G) Classic Traveller 8.5 by 11 books including the Traveller Book and Traveller Adventure
H) An small assortment of Judges Guild Traveller. Mostly crap.
I) Megatraveller, oh the errata (there was a lot)
J) My Digest Group stuff, I have nearly all of the stuff they had in 8.5 by 11 format no Booklet size Traveller's Digest tho :(
K) Traveller New Era
L) Marc Miller's Traveller (T4) a lot of crap what a missed opportunity.
M) D20 Traveller, not too bad just not into using a d20 based system for Traveller. For all you Old School folks around take note that it's prior history system is under the OGL. And it is worth looking at. Something to consider for adapting to use with OD&D.
N) My big box of Traveller Notes only my notes on the Majestic Wilderlands exceeds what I written for Traveller.

P) GURPS Traveller
Q) Mongoose Traveller, a bit too pricey and has editing issues, but it got heart and good stuff. Where it is especially good is when you want to use Traveller but with your own setting.
R) Traveller Deckplans for 25mm figures from SJ Games . I bought them mostly for the cardboard heroes that are in them.
Posted by Robert Conley at 6:00 AM

One of my favorite DGP books was the Starship Owners Guide?

It had an "old-time" who would make comments throughout the book, contrasting what the rules said, to what was "real"

I loved that book.

Oh, why did I sell my Traveller collection!

Look for the CT Apocrypha I CD...