From the Attic: Regarding Hommlett

In the mid 90s I decided I wanted to run the Slaver modules (A series) using GURPS. The leadin would be the Village of Hommlett. Our old friend Lareth would a priest of Set working as a agent of the slavers.

For some reason I got it into my head that I was going to rewrite all five modules plus the two extra filler modules I was going to create to bridge the two. I had a pretty good computer for the mid 90s and I guess I was thinking I was going to put that tech to use. This included buying a cheap copy of Pagemaker. 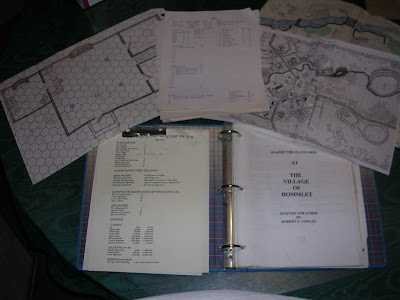 I only managed to rewrite the Village of Hommlet but it was fully detail with every NPC stated out. Well not quite that far I developed of templates to handle the different types of commonfolks.

This is an example entry

2) MODEST FARMHOUSE AND BARN
--
Clean but slightly run-down buildings indicate that this farm is not very prosperous. However, the stock appears fat and healthy. An active lad of 12 or so is doing chores out front.
--
An elderly couple are master and mistress to the 12 year old boy. These folk nothing they desire or want to trade. They will say that their son Euin (you-in) would be interested in any tales that the party may have, currently he is at the inn having a jack of ale. Their other son Osric (they sadly shake their head) took service with a mage and is away seeking his fortune.

Underneath some rusty nails in a keg in the back shed are 203 silver pennies and 3 gold pennies. Within the house there is a silver service worth 750d.

Euin has his valuables hidden in a lead lined oaken chest in the dirt floor of the barn.

NOTE: If something should happen to this family Osric will attempt to track the players down.

I used the Merovingian name chart from Dragon #49 to generate more consistent names. The picture also showed the state of the art in battle maps from the period. The one in the upper left is the Inn of the Welcome Wench.

While I never repeated this the exercise was useful because it settled for me how a complete village looked in my Majestic Wilderlands.
Posted by Robert Conley at 12:00 AM