A Walk through Harnmaster - Introduction

Columbia games is running a kickstarter to reprint the Harnmaster Boxed Set and improve the graphics.  There is a couple of days left and I figure it would be useful to run through the system so you have a better idea of what the system is about.

Harnmaster is divided into loose leaf articles meant to be placed in a 3-ring binder. There were a few exceptions but the whole line was published like this after the mid 80s. 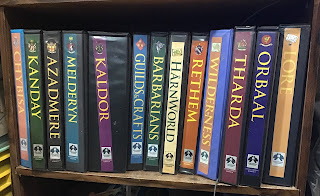 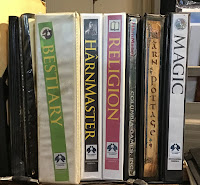 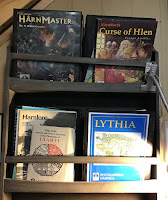 This is a 2 page article outlining the system and their philosophy. The basic gist is stated in this sentence

HârnMaster is a fantasy role-playing game in which players assume the identities of characters who explore and experience a fantasy world.

Their view of the role of the gamemaster is summarized below

The Gamemaster (GM) is apart from the players and functions much like a referee at a sports event. Among many other things, the GM controls weather and climate, societies and institutions, and deities and religions.

The GM stands between the fantasy world and the players, describing and explaining it, and operating the denizens that hinder the PCs’ lives. But the GM also operates Non-Player Characters (NPCs) who can befriend and assist PCs and should never, therefore, be viewed as the “enemy.”

The introduction also includes this about the players

The players’ challenge is to explore the fantasy world, meet it on its own terms, and succeed according to the goals they set for themselves.

The sidebar explains the other products in the Harnmaster system.

This is a short section explaining all the terms, conventions, and abbreviation used in the rules.

Rob's Comments
One of the reason I like Harnmaster and product is that their view of how to run a campaign closely aligns with mine. Most of their products I found highly useful for my Majestic Wilderlands setting because of this.

I've always been curious about Harn - supposedly more grounded than most world's. Will check out the KS!

Loved Harn back in the day. Owned everything.
I wish they'd produce a full Shorkyne Regional module.