A Walk through Harnmaster - Characters

This is a 30 page article detailing how to generate characters

The steps for making a Harnmaster Character are 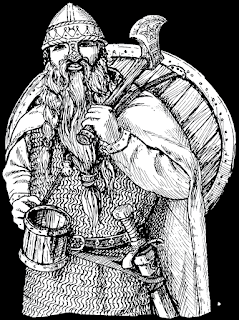 A short section explaining the Harnmaster character sheet (called a profile) and how to minimize the need to copy the information to a new sheet.

Details the circumstances the characters are born into. You either pick them or roll them randomly. They include in order
So a fiddly bit of Harnmaster is the sunsign. Your character will have one of 24 possibilities. Either a single sunsign or a be born on a cusp and benefit from two sunsigns. The sunsign modify the starting level of certain skills. Once character gen is done it rarely comes up. I always used it something unique to Harnmaster, add flavor, and because it is only dealt with during Character Gen or getting a new skill.

Now the biggie Social Class. Most character will be from a Feudal culture and that means they will likely start off as Serfs if random rolls are used. Luckily this section is either choice or 1d100. The first few times with Harnmaster it will be fun to come up with various explanation of why your character is adventuring despite being born a serf. But it gets repetitive.

This section develops the character's immediate family. Which could be important, just flavor or not a factor at all. It mostly focuses on the character relationship and is not a family/clan generator.

As an option you can roll Complexion, Hair Color, and Eye Color

Harn uses 3d6 for attributes. It has more attributes but only some of are what is called a key attribute. These are attribute used most often in the rest of the system.

Rob's Comment
What I have done is a straight 3d6 roll for non key attributes. But because of the importance of keyed attributes I have players roll 4d6 drop the lowest die. Do this seven times and arrange among the keyed attributes.

The physical attributes are

Here you can roll 1d100 to see what medical condition the players can have. A sample of the table is below. The rules are vague whether the roll is optional or not. There is a 30% change (71+) that the character will have no medical traits, and a 5% they will have multiple traits (66-70)

Rob's Comment
I strongly recommend making this roll optional and using the optional rule in the sidebar that gives the players a reward a two points to be place in a attribute if they risk a roll on this table. The feel of gambling with the character's fate adds to the char gen process.

Like Medical this these are mental disorder the character can have. 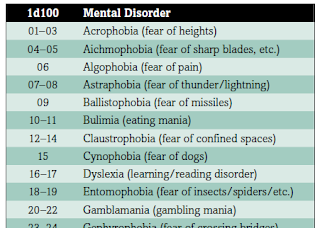 Like Medical I recommend using the optional rule that rewards the player with attributes points if they opt to make rolls on this table. This has other optional rules to pick from as well. Again there is a 30% change of no disorders, and 5% chance of multiple disorders.

A short list and explanation of the Harnic Deities and their suggested Morality ranges.

Also explains Piety Points which rolled using 5d6. Piety points measure a character standing with their deity. All players can use them to pray for divine intervention, and they are important to priests if using Harn Religion.

This section serves two purposes, for character generation and for making NPCs. It list a set of different occupations and the skills associated with them. It comprehensive for a medieval setting and also includes monthly and yearly wage information.

Starting Harn Character get skills from the following.

I will get into how skill works in the next post.

Next we get into Equipment and Funds. Basically listing how much wealth the character start out with. Unless the character is a noble it is pretty small. A lot of Harn characters in my campaigns started with little more than a clothes, a leather vest, spear, dagger, and a helmet.

This section is about generating contacts among families and allies. As well as how to call on them for favors. This is often vital for characters trying to get themselves established and looking for adventure.

This section explains how to continue character generation to produce an experienced character. Basically each year after the character finishes training give option points which can be used to improve or add skills.

This section explains about aging if the campaigns progresses along far enough.

This section explains the point based method of character creation. All Key attributes are set to 8 and you spend 30 character point to make them whatever you want.

As an option you can add 20 more cp and include the other elements of character generation.

This contains the rules for creating clerics of various Harnic Religions. However keep in mind the rules for divine magic is found in Harn Religion. This section also explains Ritual Invocations which are divine abilities usable by the clerics.

This section explains how to create a mage in the service of the Shek Pvar. There are six convocations of magic corresponding to the Harnic elements of Air, Fire, Metal, Earth, Water, Mind. Along with the seventh neutral convocation. Sun sign is a factor in how good a mage is with a convocation. Like clerics you need Harnmaster Magic for the explanation of the magic system.

This covers the various military occupations as well as provide a fair amount detail on military life. It is a great option for adventurers. Where clerics and mages get two pages each, this section get four pages full of military detail and char gen info.

One thing that bugs me: how do I determine starting wealth? The chart on Characters 17 has social class, which is easy, but a wealth level in it, for which there's no roll or other guidance in the rules.

@Charles Saeger. In my copy:

Character 13: Average monthly wage when employed is given in Harnplayer. So you could use that.
Character 20: Assume Will x 3d (3 pennies) for unguilded/military occupations, Will x 6d for guilded, and Will x 12d(or more) for Noble.

That's above their basic equipment which is occupation based.