A walk through Harnmaster - Combat Part 1

This is a 26 page article

First off if you have trouble following any of this I strongly recommend downloading and reading Bill Gant's Harnmaster Combat vs D20 Combat Essay.

Harnamaster supports miniatures and this section has the author's recommendation on what scale to use. Namely 1 inch = 5 feet, that you use 25 mm miniatures, and a hexgrid is preferred. It also goes on to say that if you don't use a hexgrid then just multiply all references to hexes by five to get the number of feet.

Harnmaster has a variety of choices for weapons. It not exhaustive like GURPS Martial Arts and focuses on the medieval along with some selections from the Roman Era. 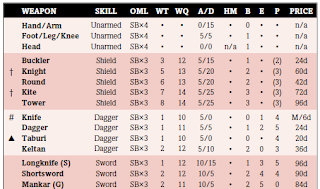 Next combat discusses Armor. Just as weapons have impact bonuses for different aspects (Blunt, Edge, Point) Different types of Armor defends better against various weapons aspects plus there is a rating for resisting fire. 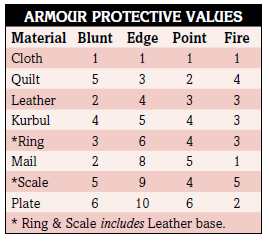 While tersely written, it is a fiddly part of Harnmaster/ Like many of the other fiddly parts it is front loaded onto the character sheet before play.

Harnmaster is at the high end for the number of hit locations. You buy armor in pieces and layers of armor stack on top of each other. Eventually the weight will radically degrade your combat capabilities but for most characters there is a sweet spot of protection for what they can carry.

For example you don't just wear a Chain Hauberk you also wear a Quilt Gambeson. This give the extra padding especially for blunt attack to resist injury.

If you get the boxed set you will also get a GM Screen that has a chart listing the totals for common combinations of armor layers.

The good news if you armor your character like you see an medieval illustration you will be just as protected in-game as in real life. 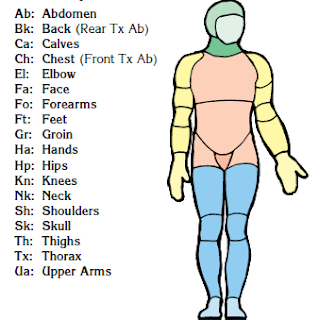 There an optional rule to damage armor if the character suffers a high impact injury. The high impact creates or tears a hole in the armor. It fiddly and I have never used it as it involves an extra roll in future rounds.

This section explains movement. Basically a walk is half move, a jog is a full move, running is double move, and sprinting is triple move. The primary mechanical effect is how much fatigue you gain while moving. It doesn't come up often in combat as sprinting causes 1 FL per 1 minute (6 rounds) of sprinting.

Like some other RPG, active characters exert a zone of control. Harnmaster sets this at five feet around the character. The effect is that if you are engaged you can only move one hex per round (any direction). If you were not engaged before moving next to the opponent you must stop movement. Engagement Zones can overlap and a single character can be engaged with up to six opponents.

There is an optional rule allowing the Engagement Zone to be extended to 10 feet for long reach weapons.

You can do one action: Res, Pass, Free Move (up to running or move x2) , Engage (half move and optionally attack), Charge (full move and must attack), Disenage (move 1 hex, and do a half move), Rise, Grope (using anything with DEX), Melee Attack, Missile Attack (Load or Fire for a crossbow, Load/Ready & Fire for everything else), Grapple Attack, Esoteric Attack (magic or psionics).

There are optional rules for