A Walk through Harnmaster - Combat Part 2

So now you are engaged and ready to attack. This section use the Harnmaster Combat Tables which you can download.

The defender either ignores the attack due to various circumstances, or if is active whether they Counterstrike, Block, or Dodge.

Bjorn with a 46 shield skill elects to block the swing with his round shield.

The success levels are compared and the result apply

Cross indexing the two success levels results a A*2 results. Which means you roll 2d6 + 5 (the impact bonus of the edge of the broadsword). 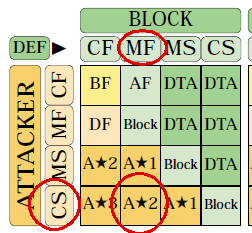 Able rolls a 6 giving an 11 impact. Able rolls a 58 for Strike Location hitting the Thorax

Bjorn is wearing a Leather Vest over a Cloth Shirt giving a protection value of 5 versus Edge impacts. So Bjorn suffers a 6 impact.

AF, DF, and BF are fumbles, you have to make a fumble roll or lose your weapon (or shield).

Block means the defending weapon (a shield in this case) intercepts the attacking weapon (the Broadsword). If you use weapon damage then the lower quality weapon has to make a save first or be functionally destroyed. If the save is made then it is the higher WQ that has to save. I recommend using this optional roll. It is a 3d6 roll low versus the weapon's WQ. There even a more brutal variant where even you make a weapon save its WQ is reduced by 1 although it still works. This seems a bit unrealistically harsh. If you want to do this drop the WQ if you make the save exactly or by 1 anything lower the weapon is fine.

So now Bjorn got slashed across the thorax (upper chest) with 6 impact. Now it time to figure out his injury. We cross index the hit location with the impact to get a injury level. In this case an S2 results or a Serious Thorax Slash 2. It is recorded on the character sheet as Thorax S2. 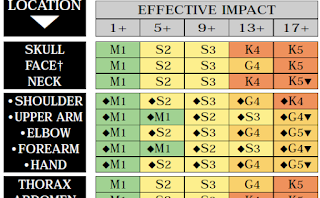 The 2 is now added to the character Universal Penalty and for this injury the character has to make a shock roll. Remember the Universal Penalty is Injury + Fatigue but not Encumbrance. For every point of UP you roll 1d6. In this case Bjorn roll 2d6. If Bjorn rolls over his Endurance (average of STR, STA, and WIL) he collapses in shock. Now Bjorn has 14 STR, 12 STA, and a 10 WILL giving a END 12. He not going into shock for this injury.

If you look at the arm location above the Thorax there is a diamond. This is a symbol for a fumble roll as it is the arm. For the legs it is a stumble roll. Some Grievous wounds to the Legs and Arms also have a upside down triangle this is a amputation roll. K results are potential instant kills. If the character doesn't die then it is converted to a Grievous wounds now the character has to make a shock roll.

The end result is that after combat the character will have a list of injury they suffered. The total of which is applied to their Universal Penalty.

Rob's Comments
I generally don't like to use tables when refereeing. But these tables are excellent to use and don't slow down play. The bright layout makes it easy to figure the result of any strike. If one wants details for combat this is an excellent way to go.

More than any other system, I find the injury system of Harnmaster gets the players invested in their character. It tersely but graphically illustrates every injury and blow the character suffers. And it just adds something to experience that other system don't have.

The sidebar to injuries give several options rules. I recommend using Bloodloss. If a grievous injury is not bound up within 1 minute (6 rounds) then the character will suffer 1 Bloodloss that adds to the UP. If the total BP exceeds Endurance the character dies. Each grievous wound counts separately for bloodloss.

This section give special combat rules for Wings, Tails, and Tentacles

For NPCs initiative is used for Morale Checks. This page covers the details and the results.

This section covers mounted combat in six pages.
The different Horse breeds are covered and their statistics along with the use of Riding Skill, Horse movement, how to command the horse in combat, and how actions work when mounted. Being mounted is an advantage especially in the impact rating generated for hitting and gives some damage opportunities not available on foot like steed trampling.

The final two pages of Combat covers Jousting. There are some specific rules and notes covering the non-lethal aspect of the joust. Along with a unique combat matrix for resolving Joust strikes.

Thank you for the clear explanation of character generation and combat. Is there a YouTube video anywhere showing Harm combat or character creation?