Why Middle Earth is working for me, the Cubicle 7 supplements

There are two main things that "sold" me on Adventure in Middle Earth by Cubicle 7. The fact that magic is presented as subtle in the core books, and the quality of their supplements.

First most of the AiME contents is repackaged from their The One Ring (TOR) equivalent. What differs are the short sections of either AiME rules or new stuff like NPCs, Creatures, and items. The rest is duplicated from the original TOR version. Luckily the TOR stuff is excellent. But I have to put it out there so you are not surprised in case you decide to buy the TOR supplement AND the AiME supplement. The Moria Boxed Set will be the first Middle Earth product that new to both TOR and AiME. For the rest TOR is generally ahead on the release schedule but AiME is catching up. 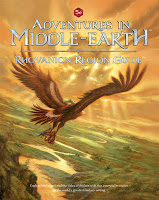 TOR and AiME have a class of supplements that can be characterized as a region guide. Both games have a referee hex map that divide broad areas of Middle Earth into regions. One reason for this is that the hex map works hand and hand with the journey rules. Another is that it offers a useful way of  organizing the geography for supplement like this one.

This is a section of the referee's map for the Wilderlands in Rhovanion. 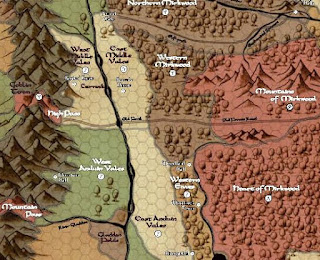 The reddish area are the place that are most  dangerous to travel in as the party found out last week when they were attacked by a swarm of black squirrels in the middle of the Heart of Mirkwood.

The Rhovanion Region Guide has three major section. The first covers the regions along the river Anduin, the second covers the regions of Mirkwood. Dale, Lake-town, and Erebor are not covered although the TOR supplement for these areas have been released. The last section are new adversaries found in these region. It includes NPCs like Gorgol, son of Bolg, and the more general like Hunter Spiders. Seventeen new foes are added plus numerous NPCs in the various region writeups.

Out of all the supplements this is perhaps the most useful.

Each region is given a general description. Has a section called combat scenery which is advice on where typical encounters take place. A description of the wildlife, and inhabitants. This is followed by a list of notable inhabitants. For example the East Middle Vales describes; Beorn the Shape-shifter (from the books), Turin the Tinker, Gelvira Pot-stirrer, Ennalda the Spear-maiden. The last three are original characters created by the author. Turin is a useful contact about the what going on. Gelvira runs a inn at the Old Ford which can be used as a home base by the PCs. Ennalda is a spear-thane of Beorn and is likely the person the PCs will interact most with if they associate with the Beornings.

Then the section goes on to describe notable places within the region. Which for the East Middle Vales is The Carrock (from the books), The Old Ford, The Isle of Strangling Tree, Beorn's House (from the books), The Grey Heath, and The Cleft of Storms. All of these provide interesting places to explore or have roleplaying possibilities.

Man it looks packed
It is and it isn't. While there are a lot of things described it isn't like my mini-region in Scourge of the Wolf where I provide a capsule description of a dozen settlement within a 25 mile radius. Each hex in the above map is 10 miles not quite the howling emptiness of Greyhawk's 30 mile hexes but large enough that even with what I described for the East Middle Vales you have to spend a day or so travelling to each site. And if you go outside of that, you are talking journey of a week or longer.

When you look at the below map for the East Middle Vales keep in mind that you are travelling two hexes (20 miles) per day by foot. That the only two "settlement" are The House of Beorn and the Old Ford with perhaps the Carrock when the Beornings meet there. Where are the Beornings? Read the description from the book.

While most Beornings live in isolated farmsteads, there are a few… well, towns would be an exaggeration. Call them villages, or steadings, clustered around trading posts or river crossings; one of the largest has sprung up in the vicinity of the Old Ford. 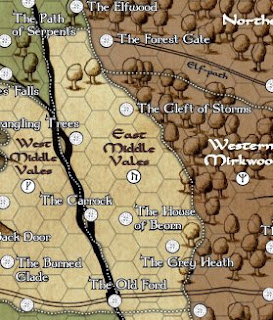 I will talk about the other supplements in the next post.
Posted by Robert Conley at 11:03 AM

Rob, I've had a similar experience. But, I'm using The One Ring rules. I did play MERP in my teens, but when about 17 picked up Harnmaster. It was a great system (for its day), and we quickly converted our middle-earth gaming to using Harnmaster, we just dropped magic as spell 'casters' never felt right. I played in m-e using Harn for 5 years. I am a little concerned that C7 may neglect those of us preferring its initial (and I'd point out 'dedicated') system in favour of the DnD version...I don't want to pay for stat blocks I don't need.