That vague setting behind Points of Light and Blackmarsh

For those of you with both Points of Lights, and Blackmarsh know that there are common elements like the Grand Kingdom, the Ochre Empire, Delaquain, etc throughout the different setting. While never spelled out in detail they are all could be considered part of the same setting. In the first Points of Light each of the three lands (Southland, Wildland, and Borderland) are also separated in time that when put together open a window into the larger history.

+Ethan Gundry asks whether has anybody had any success merging all the Points of Light settings, along with Blackmarsh? A while ago I combined the Blackmarsh and Southland map along with the work I done with the Wild North merge with Blackmarsh. The result was this. 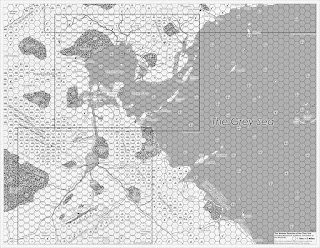 But do I have a "master" map that combines everything? Do I have a master document like the old Greyhawk Folio? Yes I now have a master map, no I don't have a Greyhawk Folio style master document. Keep in mind the focus on the Points of Light/and Blackmarsh is usability. That each individual setting stands on it own as a useful backdrop for a campaign. Making them into the equivalent of region supplement defeat that purpose. But still I want the option to exist to combine them so I keep the few background elements I write about consistent.

So what the deal with the master maps. Well I drew a lot of maps over the years and I have a bunch that not part of the Majestic Wilderlands or any other setting. For example this giant map I made for what I call the Eastgate region. 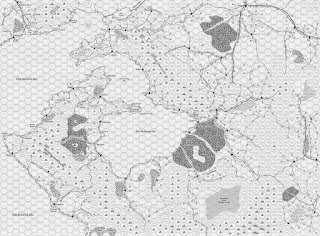 At the heart of which is the City State of Eastgate 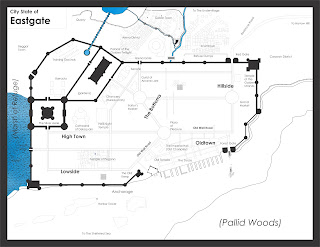 But the above work didn't go to waste as I used some of what I created for Blackmarsh.

So back to Ethan's question about combining the maps. A year ago I was sketching out some map on paper to get a feel for how mountainous and hilly regions really looked like based on Earth's geography. I decided to draw a outline map as an experiment to see how real I can make it look. The result was this. 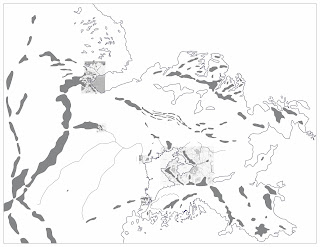 And I figured if I am spending the time doing this I might as well incorporate the Points of Light/Blackmarsh maps use the above as a future reference.

Here is the annotated version of the above. 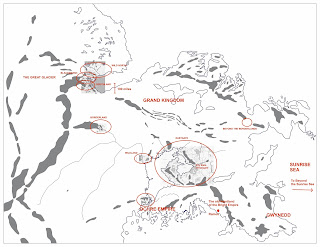 At this time I am not going to flesh out all the blank spots as I want to leave the possibilities open for further Blackmarsh style projects. The thing I am currently working is the circle marked Beyond the Borderlands basically my answer to the question of what lies beyond the Cave of Chaos in B2 Keep on the Borderlands.

I am also working on the tweaks to the Wild North to make it fit along the north edge of Blackmarsh. This is the map for that. Basically everything below Row xx26 has been tweaked while everythiing above is pretty much the same as the version from Fight On #3. 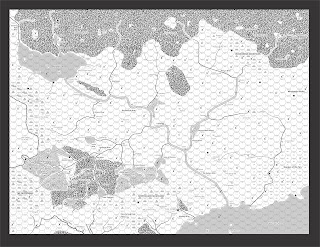 Hope this answers your question Ethan. Appreciate asking it as it gave me the idea for this blog post.
Posted by Robert Conley at 9:36 AM

Thanks for the detailed reply, Rob! My players and I will be super happy to have this information - I'll put it to great use in my campaign. I'll definitely have to pick up the Fight On magazines now too, so that I can look at the Wild North. I'm looking forward to any further expansions to the setting.

WOW. Thanks Rob! I'm just about to start my Blackmarsh campaign so that came in a really good moment. But I wonder, the sea from Blackmarsh and Wildlands (the Grey Sea), it's not the same now?

@Kaique no they are not could not make the underlying Geography work the way I wanted. My original conception was the vague setting was on a southern continent so going south it got colder. But by the time I did Blackmarsh I went back to a northern hemisphere orientation.

@Rob
Got it. I'm currently translating Blackmarsh into portuguese for personal use on my table. Also expanding with my own locations and random encounter tables. The blank map came in handy. Which font did you use on the maps?