The many maps of the City State of the Invincible Overlord

Sales of the City State of the Invincible Overlord color map has been good, with 100 copies sold so far. I ordered another copy of the map for myself to see what it would take to assemble into a single map.

I started by dabbing some two way glue on the overlapping areas. Once it turns clear it act like sticky tape. I can carefully pull apart the two maps and adjust the alignment. Once I got it right. Then I use clear packing tape make a solid join. After I got all four maps together and taped I took it to Staples and got the map laminated.  I was happy with the result but look forward to the day RPGNow gets posters added to the paper sizes they support for print on demand.

While doing this, I was reminded of how many times I dealt with different version of the CSIO Map.

So I pulled them all out and took pictures with my lovely wife Kelly Anne. 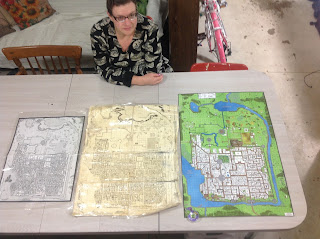 The one on the right is the color map joined together and laminated. The one in the center is the original map I got in 1980. As you see the color map is slightly longer but the same width. The one on the left is the map for the Necromancer Games version of City State. I didn't draw that one but did proof it for the cartographer. 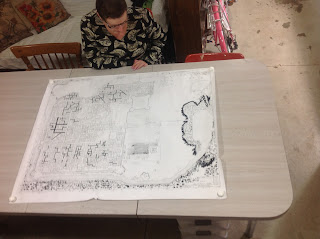 The above is a photocopy of the original no name city map drawn by Bob Bledsaw. I used to double check the original printing. The offset printing process required the original handdrawn map to be photographed to the paper size which causes a small loss of detail. 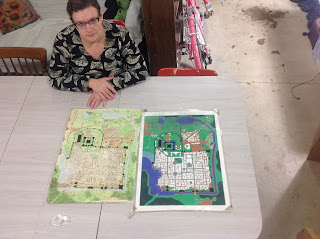 Around 1986 my CSIO map was getting worn as you can see in the first photo. And the setting was developing into the Majestic Wilderlands. I was studying for a geography minor so had access to light table and a set of technical pens and rules I had to buy for class. So I put the original map on a light table, a piece of vellum on top and proceeded to draw.

Here a closeup of that map 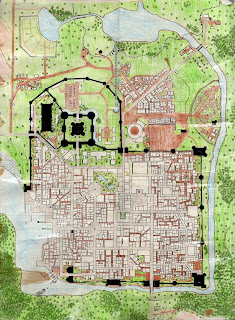 Then around 1993 I bought a copy of CorelDRAW 4 as well had access to a HP 12" by 12" drawing tablet. When I drew the hand drawn map, I drew just the ink line (walls, buildings, shorelines). Had it photocopied on a blueprint copier and then added the color detail.

I still had the master I photocopied off so I had it reduced to to fit the table and used it make a rough sketch of where everything was located. Then built the map up layer by layer to the below result. 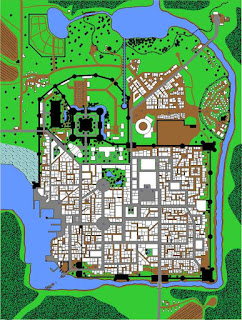 This was my first major map drawn using CorelDRAW. Which after much practice led to the below. 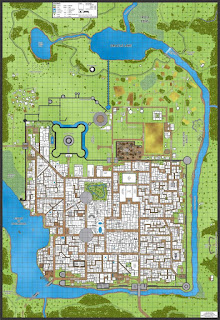 At some point I will modify the Majestic Wilderlands version of CSIO to this style.

Hope you enjoyed this. Those of you attending Gary Con (and later North Texas Con) will be able to purchase the maps at the convention from Jon Hershberger and the Black Blade Publishing crew. In addition to the map themselves I am sending the following cover sheet to use in the packaging. 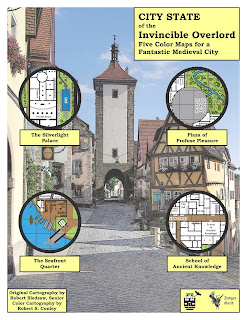 Good job. Was wondering what you thought of the kickstarter update from Bob III. A lot of rumors are flying and it would be nice to have both Bobs give a straight answer to all the backers.