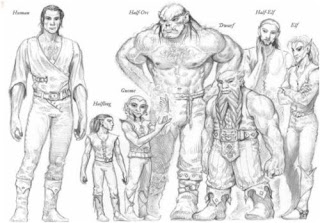 +Joshua Macy has a complaint that not uncommon, all the players in his campaign made non-human characters. Let's face it, non humans are cool kids of fantasy roleplaying. Most races have interesting backstories, memorable characters, and of course the racial abilities. Sometimes all three like with the Drow.

Starting with DnD 3.0, later edition attempted to rectify this by giving Human their own racial abilities. Typically extra flexibility by granting a feat or two, increased ability of the player's choice, or more skills. But still it seems lacking and rather bland.

The primary way I fixed it was to grant a 15% XP bonus for humans that works the same as the XP bonus due to having a high prime requisite. Read below the fold for my reasons why.
There is the approach of Adventures in Middle Earth, where the focus on is on picking a culture not a race. Two of the culture, Dwarves of the Lonely Mountain, Elves of Mirkwood, and the Hobbits of the Shire are indeed different races. The rest, Bardings, Beornings, Dunedain, Men of Bree, Men of the Lake, Men of Minas Tirth, and Riders of  Rohan are human but with very different culture abilities.

Furthermore Adventures in Middle Earth replaced feats with virtues, most of which are more roleplaying oriented than combat oriented. Each of the above cultures has their own list of virtues that only they can choose. All and all AiME does a great job of making human as interesting choice as the non-humans.

But what about a bog standard DnD campaign? While the above fixes the issue it is a lot of work to do for a setting. Many referees neither have the time or interest to write up something that elaborate.

When I was writing the Majestic Wilderlands Supplement in 2009, I thought of focusing on race as culture. This stemmed from some stuff I did for DnD 4th edition.

Alas it fell by the wayside due to all the other things I had to work on to get the supplement written and published.

After publishing Majestic Wilderlands I ran more campaigns using it and soon ran into an issue related to the one Joshua complains about.. The roleplaying complications I use for non-humans in a human dominated culture tended to make party majority human. However the players complained about the disparity in abilities between humans and non-humans.

While some of it was due to the players desire to have "better" characters. I felt they had a legitimate gripe. I found through designing the supplement is that when there is an imbalance it is better to "reward'' than it is penalize.

This can be seen in my ability system for skills. Every characters can use any ability, but some classes, particularly the rogue classes, are better at some abilities than others. Rather than saying to the fighter player, "you can't pick locks". I say "You can pick locks, but the burglar is always going to be the best at it.".

While there is no negatives for playing humans, most players in my campaign acted like there was. So I searched for a way to fix this. Being based on ODnD my rules didn't have feats so that was out. I didn't want to grant attribute bonuses or extra point to use on abilities. Other edition did that and it didn't seem to fix the issue. Then while fixing some typos with the prime requisites XP Bonus it hit me. Why not give human a XP bonus over and above the other races?

It is simple to implement and to understand. And it has the virtue of pandering to one of the things that the players are most interested in, gaining XP to level. The question then becomes how big of a bonus it needs to be to make a difference. As it turns out after several months of playing with different numbers 15% hit the sweet spot. So I added that to the +1 to a chosen attribute that I wrote in the original release.

So the write up for Man (humans) now reads as follows


Man is the dominant race in the Wilderlands. The combination of hardiness, birth rate, and intelligence has allowed them to spread to every corner of the land. The wide range of conditions that humans face has left them highly adaptable. The gods have not chosen to reveal the mystery of Man’s ultimate destiny. Among the wise it is said that Man’s ability to leave the Wilderlands after death is an integral part of this destiny. Some consider this to be a bitter gift.
• Humans gain +1 add to the attribute of their choice.
• Humans gain +15% to all earned experience
• Human base move is 120 feet per round.

Since then it worked well, and the complaints about that issue disappeared. The +15% proved just sweet enough that despite the advantage of the Elves, Dwarves, and other non-humans, the human players felt they were holding their own. And it had little effect on how combat and roleplaying encounters were resolved.

Posted by Robert Conley at 8:58 AM

The 5e variant human is absolutely the most fun to play at first level with the bonus feat. Our ravenloft campaign didn’t have any non humans at all. It just makes no sense (in fun terms) to be anything else in 5e.

I prefer the AS&SH solution: no demihumans.

My favorite methods:
- 5e's free feat is cool and make humans a bit more desirable.
- Instead of level limits, XP costs DOUBLE after a certain levels.
- My own Dark Fantasy Basic has humans only, but suggests that, if you're using demi-humans, just make them better. But you gain more feats/abilities if your level is greater than the number of feats/abilities. This means starting with 5 abilities won't allow you to get extra stuff (except HP, BAB and some bonuses) until level 6. In practice, this means humans are a lot more customizable.

What I wound up doing instead does hinge on other changes I've made to my OD&D games, so it technically does -some- violence to the RAW, but here it is for your consideration anyway (as best as I can explain it in brief):
• All of the human classes have exactly one prime requisite; all of the demi-human classes have two.
• There is no attribute that isn't a prime requisite for some class, including Constitution and Charisma; therefore CON, CHA, and DEX aren't singled out as handled differently when it comes to adjusting abilities at character creation.
• Instead of XP adjustments for high or low prime requisites, the adjustment table used for all attributes is −1 for a score of 3–5, no modifier for a score of 6–15, and +1 for a score of 16–18, UNLESS THE ABILITY IS PRIME FOR YOUR CLASS, in which case bonuses are accorded using the classic D&D table: +1 at 13–15, +2 at 16–17, +3 at 18.

And then the kicker: after rolling stats on 3d6 in order, humans can buy up their prime requisite, adding 1 point to this stat for every 2 whole points they take off of any other stat, so long as the drop doesn't bring the score being cannibalized below 6. (Thus, a score of 7 or less cannot be lowered at all.) Demi-humans can do the same to raise either of their two prime requisites, but it costs them a full 3 points from one of their non-primes to raise a prime by 1. All 3 points must come off of a single stat (no splitting allowed), and again the adjustment can't bring a stat below 6, so a demi-human can't cannibalize a stat of 8 or lower.

I always find these reports interesting because I've pretty much always had the exact opposite experience. All of the groups I've played with have been human dominated with maybe one or two demi-humans. I usually had to find ways to encourage players to play as an elf or dwarf because it never happened on its own.