In the previous post I talked about how I developed Scourge of the Demon Wolf. How does one get started with this type of adventure?

Sourge of the Demon Wolf  was developed during the course of one of my GURPS campaigns around 2000. I knew the players were planning to travel along a specific road from the events of the last session. There was a small chance that something different would have occurred but given their goal the odds were high they were going to do. Remember that once a sandbox campaign gets going,it gets easier to predict the players are looking to do for the next session. 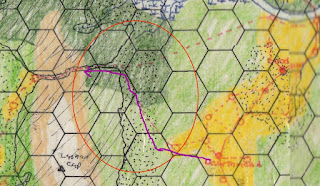 PC Route
What does it suggest to you?

Thinking of ideas I was inspired by a movie called the Brotherhood of the Wolf about the Beast of Gevaudan. Now I have a basic situation, a monster terrorizing the countryside. What the monster? A wolf of course, but abnormally powerful wolf. Where was the wolf doing this? That was easy for me as a lot of that region were medievalish manorial villages. So I picked one near the road the PCs were travelling on.

Why is the wolf on a ramage? Here I diverged from my source of inspiration and picked something more suited for my campaign. To make the wolf more powerful I elected to have the wolf possessed by a demon. How did get it possessed by a demon? By a botched summoning! Who botched the summoning? A mage's apprentice greedy for power. Where was the apprentice's master? He was one of several living in a mage's conclave in the wilderness. 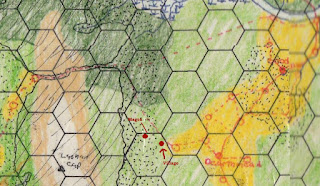 Now I turned to who the demon wolf was terrorizing. I knew it was a fantasy medieval villages. So I came up wtih a reeve, a village priest, and added two characters for local color. A old guy who "minded" the local tavern and Yoluf a trapper that could act as a guide if the players hit it off with the Reeve.

To connect the village to the mage I had the apprentice be sloppy and left much of what she used for the botched summon out at a site in the wilderness to be found. 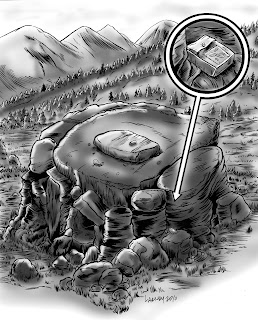 At this point I could have run it. But the situation would have been straight forward to resolve. If the PC elect to pursue the reports of wolf attack, they go to the village, do a bit of roleplaying, go out into the wilderness, maybe fight some wolves, find the summoning site, realize that mages are involved, find out about the local conclave and then head there. Another alternative they could just resolve it by main force and figure out a plan to kill every wolf in the area including the Demon Wolf.

So in the next post I will explain how I complicated it.
Posted by Robert Conley at 5:11 PM

Fighting wolves and other wild animals is a sucker's bet. They eat up your resources and have no treasure. Will your players consider this?

Sure, but they going knowing that they could have helped but didn't. Then I would have rolled some die made a note of the outcome and it would be part of the news if they ever made their way back. And one of the possibilities that the Demon Wolf goes in power and now poises a major threat to the region that the PCs now have to travel through again.

The most likely outcome that the Baron with difficulty finally deals with the demon wolf but not before much of the village gets wiped. So the next time the PCs walk through the area it would be depopulated and overgrown due to the lack of labor.

Or there would have been a change that the locals could have dealt with it on their own.