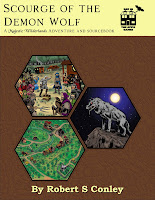 In the last post I talked about my background in refereeing. As result of my experiences I found that I had to lot to write about sandbox campaigns. Stuff that people could get and use in their own campaigns like Points of Light and Blackmarsh. On my blog I worked on a series of posts about How to make a Fantasy Sandbox. One thing I didn't write about as much is what happens session to session, like the adventures I ran during a sandbox campaign.
Scourge of the Demon Wolf is an adventure that represent what players typically deal with in my campaigns. One that allowed me to publish Scourge was that it was self-contained enough to written up so it was useful for other campaigns. Most of my sandbox adventures are highly situational based on the circumstances of the PCs involved. But occasionally something like Scourge happens and I can set aside my notes for further development.
What makes Scourge a sandbox adventures? First off it is a situation that has the potential for adventure. The situation is driven by the interactions between the various NPCs. For Scourge it starts when an ambitious apprentice foolishly summons a demon. To the apprentice the ritual appeared not to have worked. So the apprentice returned the conclave where she was studying. But shortly after a weakened wrath demon from the Abyss emerged. Without the proper completion of the ritual, the Wrath Demon floated around as a spirit and possessed a nearby wolf pup. Thus the Demon Wolf was born. 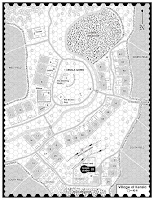 The area in which this occurs is a typical rural fantasy medieval setting. There is a village owned by a Baron and has a Bailiff and Reeve that work together to manage it. There is a crossroad hamlet nearby with a inn. More unusual is a conclave of mages living in a small compound just half day into the wilderness. There are also bandits that prey on caravans and a group of wandering beggars that occasionally travel through the area to smuggle stolen goods. Finally there is itinerant tinker that wander the area making a few pennies by selling small goods and doing repairs.
The Demon Wolf goes on a murderous rampage, people die, the Baron sends his huntsman who is outwitted, and finally in a second round of attacks the baliff of the village dies. The villagers refuse to bring in the harvest until the creature is killed. The Baron can't have this so sends the PCs to deal with the situation once and for all. There also a number of other hooks including the thieves guild sending somebody to find out why the bandits or beggars are not paying a cut of what they steal.
This is the setup.
How did this get written up? Most of the time author get an idea; write, refine, edit, and then finally get laid out as a book or PDF and published. This works for a lot of published adventures. But they suffer from the same problem as a movie or a novel, it hit or miss whether the hobby winds up liking it. Sure experience helps but still a roll of dice whether something catches on?
Is there a better way of doing this? Or rather there is something we can do more. What I didn't mention above is playtesting. Because writing for RPGs is about writing for games, playtesting is part of the process. However how do you playtest? You get your draft into a semi-finished form and try it out a couple of times. Then use the feedback to tweak it from there.
The problem I have with that process is the initial draft especially for adventures. Normally people lay out a rough draft from start to finish and use that as a starting point. A lot of the structure of the adventure is baked in. What if you took advantage of the fact that RPGs are a active form of entertainment and just started with a initial situation. You have NO idea how the adventure is going to conclude when you start the process. Would it be a more useful adventure for others to use in their campaign?
By the time I decided to publish Scourge I ran it two times already. Once for GURPS and once for D&D 3.0. So I had a some information of on the things that PCs were likely going to do. But now I was going to publish it, I resolved that the final product would be in part a record of what the players do and not do in the various playtest sessions. And see if this really made for a better adventure.
By the end of the process I have ran it over 8 times through my home region centered NW Pennsylvania and twice in other locations in the United States notably Morningstar Games in Savannah Georgia. By the sixth time I ran it I started writing, and was incorporating notes from the 8th and last time I ran the adventure.
What did I wind up writing about? I wrote about the region, the locale, and the NPCs. The playtest helped pare down what I needed to write about. Then I consolidated common events caused by the PCs and wrote them up. I included notes about where things diverged. I made sure I included a one page summary to get the referee up to speed.
The stuff I pared away I reformatted into a sourcebook. I laid the book out into two sections, the adventure and a small regional sourcebook that fully fleshed out each of the locales in the adventures. You can run the adventure with what in the first half. Then use the second half as part of your ongoing campaign.
So how did sell? OK didn't burn down the RPG hobby by any means even by OSR standards. But creatively it was very sastifying and currently repeating the process for a couple of other adventures.
Any downside? Yes time, it is very time intensive to do this. Not good if you need regular cash flow as a business. You couldget a pipeline going where you are playtesting all the time so when the first adventure is finished there always one more behind it almost done. Then you have to think of travel expenses for face to face. The rise of vritual tabletop software should make this easier. You could schedule periodic sessions and really rack up the playtest hours. But you are still going to need to do face to face as not all hobbyists can be found on-line.
For me using my hobby time to develop this, it took me three years to rack up the eight playtests. Although in the third year, I slacked off the writing a bit too much I have to admit. Today I can probably do eight playtest in a year with two run face to face at a game store and/or convention and the others run on-line.
Next time I will be talking about the creative process I used to develop the initial setup.
Posted by Robert Conley at 12:21 PM

Interesting. I've always concentrated on story, rather than module. Perhaps I should give a try to writing a module.

The truth is that "story" has always interested me, whereas "mechanics" does not. So I don't quite get the whole "writing for 3e" thing. A story is a story, the mechanics one uses to run the story as a campaign? Razzberry!

@Mystic Scholar, think of it as if you are creating an experience that a story will be told about later. The difference that you don't know how an experience will turn out. It dependent on how the people participating reacts and what they do. We tell stories when we recount the experience. This is the heart of the difference between tabletop roleplaying and watching a movie or reading a book.

First of all, I think that Scourge is a top-tier adventure. Everything you say about how it's a sandbox adventure describes why I love it so much - it just presents a set of interesting problems and doesn't try to anticipate what the players will do about it.

You wonder in your post whether there's another way to expedite the whole adventure writing process. Listening to your description of the creation process, it sounds like playtesting is the biggest bottleneck. It sounds like something that could really benefit from enlisting other GMs to run it in a kind of "closed beta."

The participants give their time and feedback, ideally recording sessions. What they get out of it is free and early access, not to mention getting to talk about running games and have an audience that actually cares. I'm guessing some publishers do this, but I wonder if anyone is "crowdsourcing" it.