Thoughts on Tabletop Roleplaying - Why?

I run campaigns where the overall direction is set by the players. At the start of the campaign I setup the initial circumstances based on what the players want to focus on. Circa 1980 when I first started using Judges Guild Wilderlands of High Fantasy, I pretty much threw things out there and hoped for the best. Later I learned to talk to them beforehand about their goals. Note that is not a elaborate or formal process just something I know to ask as part of the back and forth banter that goes on before the start of any RPG campaign.

What set my campaign apart initially was the fact that I had no problem with the players trashing the setting I created. Kill the King, Sheriff, High Priest or local merchant? Sure no problem. But player better think it through and come up with a decent plan because it will be a challenge and there will be consequences.

In addition another thing that set me apart that the result of the previous campaign became part of the background of the setting for next campaign. At first it was just a novelty because the Wilderlands were a big place. But as time went on, more and more of the Wilderlands were affected by something the PCs were doing. And many places were affected by multiple parties  especially the City-State of the Invincible Overlord. 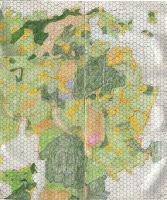 The original Wilderlands of High Fantasy were pretty light on the details of the world. It had local detail in abundance but not much on at the level of Kings, and Emperors. Over multiple campaigns set in the same setting, I started developing a consistent background of my own. Eventually around 1988, with my originals wearing out, I used what I learned in cartography as part of my geography minor to hand draw an brand new set of maps for my own use. I expanded the scale slightly from 5 miles per hex to 12.5 hexes. Adopted some ideas on cartography from Harn and from then on the Majestic Wilderlands started to come together.

By 1988 I switched to GURPS. Rather then going off on a completely different tangent with the Majestic Wilderlands, I adapted the stuff I was doing with AD&D to GURPS. Sure there were differences as combat was deadlier, and more detailed. Character capabilities were more detailed and more flexible due to the point based system that GURPS used. But by and large players still explored dungeons to find weath and magic items, and still were trying to knock off kings, emperors, and merchants.

One of my favorites was one where everybody was a member of the city guard and characters started out with half the normal number of character creation points. The tactics and gear the players developed as a result of that campaign I still use today. If you have my Majestic Wilderlands Supplement the Knight Killer Crossbow (page 4 in the link) was a result of that campaign.

Another favorite was another low point character creation campaign where everybody was part of s small neighborhood in City-State. The highlight was the PCs successfully coming up with a plan to take out a vampire with blankets, pots, pans, and rope. And they succeeded.

Finally in the 2000s I started using OD&D for my regular campaigns. I already had some experience with the system from the various hexcrawl formatted settings that I wrote like Points of Light and Blackmarsh.

After reading Matt Finch's Old School Primer a bunch of things came together in my head that didn't happen when I first used AD&D. I saw how I could do with OD&D everything I was doing with other RPGs like GURPS  but without the overhead of the more detailed mechanics. I still enjoy playing those RPGs but OD&D worked out as the better choice for the time I had. I started using it and eventually wrote up what I did in the initial sessions as the Majestic Wilderlands Supplement.

This is why I run the campaigns I do when it comes tabletop roleplaying. Next I will talked more about the nuts and bolts of what I do namely how I setup and use sandbox adventures.

Rob,
Is your equipment list (in glorious silver!) available as a printed booklet anywhere?
Thanks,