Poor quality scans for the Wilderlands of High Fantasy

Over on RPGNow and DriveThruRPG Judges sells scans of the original maps. Many have commented on their poor quality. The reason for this is because they were made in the early 2000s by a fan who had access to a large format blueprint scanner. The problem is that the blueprint scanner could only scan black or white. The scan area under each pixel could register either only black in color or remain blank i.e. white.

Even a decade later large format scanners that could do full color were rare. I tried to get my own hand drawn version of the wilderlands map scanned and the best I could do was greyscale.

When I got aboard with Judges Guild and Necromancer Games, Bob Bledsaw sent me a CD of every scan they had whether it is maps or books. Most of the published maps were in there but not many books. 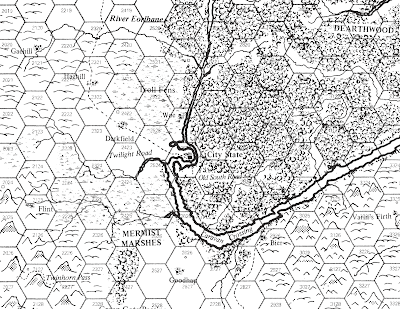 Somewhat readable. So what can one do to improve. Luckily the PDFs of the maps Judges Guilds allow you to export the map as a full resolution image if you have a program like Abode Acrobat or another PDF editor. I recommend saving this image as a PNG or TIFF.

Once you have that image you can then using a image processing program like Gimp, Paintshop Pro, or Adobe Photoshop to blur the image ever so slightly. New version of these programs have an adjustable blur. I would keep bumping it up until the b/w cross hatching disappears. The map looks way better although you can detect the blurriness when you look close at it. 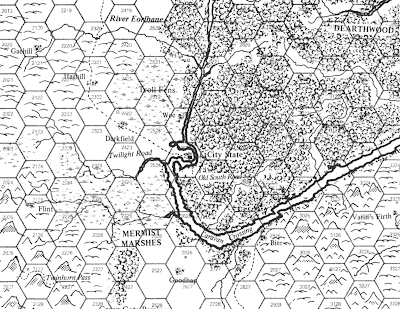 I hope this helps with getting more out of your purchase of the original Wilderlands Map.

Posted by Robert Conley at 8:28 AM

If you follow up with an unsharp mask -- stupid name, for reasons you'll see -- it'll sharpen the image again, removing a bit of the blur.

Thanks Keith for that tip look that helps.