War System or Battle Machine? Along with a Chart

So which you folks like better "War System" or "Battle Machine" as a title for a retro mass combat system?

At lunch today I did some digging into probability math. I wanted to answer the question "If I had 10 guys rolling a d20 with the same chance of hitting something what are the odds that none of them will hit, all of them hitting and in between.
While the raw machine is a bit hairy luckily Microsoft Excel has the function I needed built in. It is called a Binomial Distribution and I can use it to estimate the odds of the number of X successes in Y trials with Z probability of success.

In Swords & Wizardry it is all or nothing for each figure of 10 men and you have to roll for each . I feel this is unsatisfying for a full blown mass combat system. It would be easier just to make one roll for entire unit of figures. You roll and multiply the result by the number of Figures in the unit.

I am still not sure how BattleSystem 1st put together their chart mathwise. However I did quickly run up 2d6 charts for 10 men figures rolling a d20 to hit. 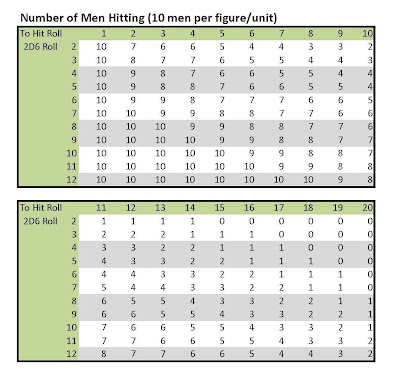 If you unit has 10 figures (100 men total) needing a 15 or better to hit a group of marauding orcs and you rolled a 8 you find that 3 men per figure hit the orcs for a total of 30 hits. If you are using the mass combat system from Swords & Wizardry you roll damage. For this example lets say it is 1d6 spears. I roll a 4 which means I inflict 120 points of damage on the spear.

This is just a starting point and I when I get the time I will refine it further. I figure those using the Swords & Wizardry Mass Combat could use this chart right away.
Posted by Robert Conley at 3:28 PM

I'm going to place my vote with War System of the Battle Machine ;)

Nice! will be following this. thanks for doing the math :D