Wandering through the Woods at the Gold Star Anime Part II

The party quickly found the only inn, the Laughing Rabbit. Unfortunately it was crowded so only one room was available as well as the common room. The party found Sir Padrin and delivered the Baron's message. During the conversation they found that a new governor have recently arrived and he was a Myrmidon of Set! Something that Sir Padrin, a devotee of Mitra, found to be unsettling. The party did not know what to make of this development either.

While settling in at the Laughing Rabbit they heard a ruckus outside their door. As it turned out Marcion was being ejected from his room for being several days behind on his rent. Taking pity the party paid for his room for several days.

Ashling didn't like the looks of one of the onlookers down the hall. He appeared to take way too much interest. The party went into Marcion's room and talked with him. They found out he was a treasure hunter and spent nearly his last silver penny trying to find a lost elven settlement he has a map too. He successfully got everybody to join with him on his next attempt with equal shares for everybody.

After this the party went shopping. First they looked around for a magic shop only finding a stall run by a creepy merchant. Thin wiry, with lank hair, he unsettled everybody with his high pitched voice. None the less just about everybody found a few useful items mostly healing potions, +1 bolts and +1 arrows. Hazzar went to a hideworker and was able to buy a pair of boots with inserts to hold daggers. Apparently the Hideworker is a Brotherhood of the Lion wanna-be (the local Thieves Guild) because was buttering up Hazzar to the point of him being uncomfortable. During all this Ashling spotted the man from the Laughing Rabbit shadowing them. He quickly walked away when Ashling waved at him.

After the shopping was done it was nightfall and the party retired to the Inn to east. During the meal Ashling spotted the man deep in conversation with some friends. After they finished eating the man when upstairs and his friends left the end. Ashling successfully shadowed them, over hearing that the "Newcomers look to be an easy mark for the ambush tommorrow.". He was able to followed them to a hut. After listening to their preparations Ashling cast hold portal on the door and proceeded calmly to tell them that he will burn them alive. After a few moments of confused babble, Ashling cut in. Telling them that being on the ambush tomorrow was not a good idea if they knew what good for them. And he then left.

When he came back to the Laughing Rabbit he gathered the rest of the party and knocked on the man's door. After a few "I will be there" they hear him ripping the parchment off the window. The party busted the door down only to see him drop down from the window running into the darkness of an alley. Ashling then pulled out his dagger, a Pakim Gingwatzim, and had it changed to it's free form. A green glowing orb. Ashling sent the Gingwatzim after the man. When the party reached the street they heard his screams from the alley.

Searching the area they found the Gingwatzim surrounding the man who was writhing on the ground. Ashling called off the Ginwatzim and knelled down. He quietly told him that he should pick somebody else for his target. The next day the party woke up with Maricon, equipped themselves and headed into Dearthwood without further incident.

(I got a good laugh when I looked at my notes and said "Well there goes that encounter.")

The party followed Marcion's map but to no avail. The closest they could find the old settlement was this large tangle of briars choking the entrance to a valley. Hazzar climbed a tree and confirmed that he could see the top of some ruins

Janus once again communed with Silvanus and attuned herself to the forest. The briars spoke in soft whispers asking her to "Come closer." warned by a kindly old oak and the general creepiness of the briar's request she elected not too. However to her surprise it turned out that not only she could talk to plants but command them as well. The reluctant briars formed a path getting in a few jabs here and there. 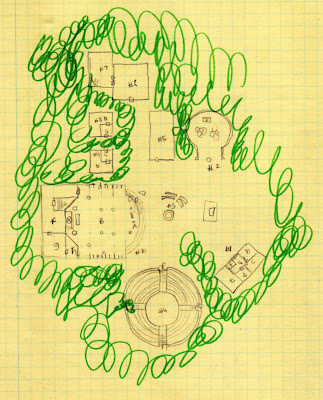 The path emerged in the midst of a ruined elven settlement. After looking around they get an eerie feeling of being watch when a shrill cry broke out. Two displacer beasts attacked the party. Tearing into the party with their tentacles they killed Marcion, bad luck to the end.

A hail of arrows and bolts grievously hurt one of the beast and a tremendous shot by Ashling firing his Knight Killer Crossbow killed it. After a few minutes of chasing down the other beast they finally corner it and killed it as well.

Hazzar and Hunter decided to explore the Southeast building. Upon entering they were beset by orcs. The fight was going well until a huge orc burst out into the narrow hallway. His blow send Hazzar hurling down to the end of the hall, knocking him down prone. Hunter was holding his own after having the misfortune of throwing his bow not his arrows at the orcs.

The rest of the party scrambled to help Hazzar and Hunter. After both the big and little orcs fell Hazzar decided to take a chance and explore the building. Opening the door at the end he was smacked on the chest with a spike trap. Luckily his armor absorbed most of the damage. While the rest of the party was examining the orc he continue to explore the room. Spying a ornate casket he decided to use his Legerdamin to open the lock.

He knew he fail when he felt the prick of a needle into his skin. With cold sensation of paralysis spreading across his body, Hazzar fell the ground. Janus examined Hazzar and found that he was under an elven poison that would leave him paralyzed for several hours. Janus put the casket in his sack but Hunter promptly removed it. After a tug of war that Hunter won, the halfling smashes the lock and the bright sheen of silver spreads across the floor.

P.S. The second map is a very old map. I have a No. 983 Computation Book that is filled with graph paper and a sturdy pasteboard cover. It huge about 1 1/2 times the size of a normal piece of paper. (Not quite 11 by 17) and has over 144 numbered sheet. Most of my earliest maps are on this book. Including the one above. Unfortunately the keys are long lost. I decided for my next adventure after Scourge of the Demon Wolf to reuse these maps and breath new life into them.
Posted by Robert Conley at 6:00 AM

I love the Oakwatch map. Like all of your maps, such good work, and looks like it could be a real place.