Wandering through the Woods at the Gold Star Anime Part I

After a circle sweep of Games Stores along the southern shore of Lake Erie (recounted here by Tim of Gothridge Manor). I arrived at the Gold Star Anime for an evening of gaming. Big Jerry showed up his display of old school products. Jon at Black Blade Publishing set up with a nice selection of various S&W products including the S&W Core Rulebook and Knockspell. Also there are copies of my Majestic Wilderlands avaliable. So if you are in the region (Cleveland, Erie, Buffalo down to Butler) there some old school goodness avaliable in a retail store. 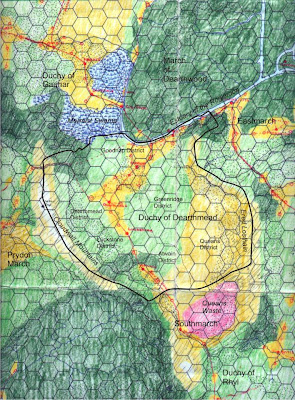 They started out in the village of Westtower just after a night of revelry for their victory over the Demon Wolf at Kensla. The good Baron of Westower sent his seneschal, the dour Cardin, to hire the party to deliver a message to his man, Sir Padrin, at OakWatch Keep in the dark forest of Dearthwood. With the Seneschal was Ashling Anubis a guest at his court. Ashling was leaving that direction and asked if there was anybody he could travel with.

Janus, Nazim, and Hunter agreed and went about gathering supplies for the journey. Unfortunately, despite being a baronial seath, Westtower had no horse for sale but there was an Ostler in town around Dearthmead Castle that party could by from. Deathmead was were the road from Westtower intersected the Old South Road which lead to Oakwatch Keep.

They had an uneventful journey that take day and they arrived at Dearthmead Castle. Checking at the nice Red Fox Inn they esquired about local ostlers and were recommended to goto Tarvis'. Ashling stepped and bluntly asked what his kickback was. The innkeeper blushed red and scurried away clearly spooked by the uncanny elf. The party went to Navise the ostler recommended by the Seneschal . Navise was a bit rough both in looks and speech. But he sold the party 2 good quality horses and a pony at a fair price. The next day the party woke up and headed north along the Old South Road.

After staying for a night in Goodnap they descended to the valley of the Roglaroon to the ferry. The Roglaroon is 5 miles wide where the Old South Road intersects. The ferries are large barges capable of transporting whole caravans.

Beyond the Roglaroon was the dark eaves of the orc haunted Dearthwood. The learned from travellers heading south that there was no troubles along the 5 leagues from the ferry to OakWatch. But Janus concentrated and with the blessing of Silvanus she could now hear the whispering of the plants and trees along the road. (Cleric of Silvanus at 3rd Level can cast Speak with Plant 1/day that lasts 1 hour).

About 1/2 hour Janus starts hearing talk of Orcs shadowing the party along the ridge to the north. Warning the party everybody look and spotted the war party through the trees about 300 yards away uphill. They spurred their horses, intending to outrace the Orcs to Oakwatch. However Hunter the Halfling and Janus were unfamiliar with riding caused the party to slow down to a fast canter. Then the road started curving north, climbing the ridge. Continuing to talk with the flora, Janus found there was an ambush ahead. However a sleep spell by Ashling made short work of the Orcs. When examined the Orcs were found to be of the Purple Claw Tribe.

After several more hours without incident they arrived at Oakwatch Keep. Note the map isn't finished yet. Oakwatch Keep is a classic Motte and Bailey keep built nearly 20 years ago as part of the Overlord's expansion plans to conquer Dearthwood.

More Tommorrow
Posted by Robert Conley at 6:00 AM