While working on Fight On! article I ran into a bit of writer's block and decided to work out what the immediate region around the City-State looked like.

This is the hand drawn map I used for nearly 24 years. 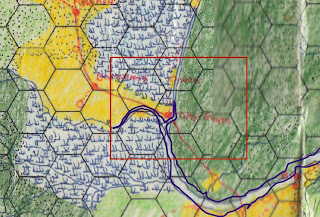 Sometimes in the early nineties I stated out all the settlements in the main campaign area. Below is the data for the above map.

So I pulled up the regional template I created for Nho and started drawing away. Coming up with this. 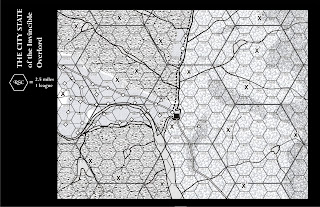 City-State is the black square drawn in the middle. It is drawn to scale. The round keep system to the north is Woe. The black road with white going west is the Rorystone Road. The forest to the east is Dearthwood. The black road with white going SE from City-State is the Old South Road. The swamp to the north is the Troll Fens, the Swamp to the south is the Mermist Swamp.

The reason there is a bunch of villages between the swamp and the river is that the string of lakes is where it used to go. It shifted course a couple of decades ago during a series of bad floods forming an isolated district.

A series of chalk hills form the southern boundary of the Troll Fens. The land slopes upwards from the Mermist Swamps forming the hills when it drops suddenly on the Troll Fen (north) side. There are several good sites for mining and quarries which the triangle represent.

This topography also keeps the narrow strip between the large marshes well drained. It also a critical component of the defense of City-State as any army is forced to come straight at the city through a corridor 25 miles wide. Because of the fens and mountains and being at the head of navigation of the Estuary of the Roglaroon City-State is an ideal market for connecting trade between the Winedark Sea to the east and the interior of the Padizan Peninsula to the west.

The reason I created stats for the settlements in the Main Campaign Area is that many players in my campaign wind up owning estates or managing them. The following is a series of rough rules for calculating troop strengths and income.

Households average 5 people per.
You would have one knight equivalent per manor that averages 2,500 acres.

A Knight equivalent is 1 knight(hvy cavalry), 1 squire (light cavalry), and 3 footmen (assorted).
60% of Manors offer personal service for 90 days 40% will commute their service by paying a find of 90 gold apiece. If you want to get more complex some will offer more limited service for a fine of 1 gp per day not served.

Rough Income
If a noble owns a manor then he gets 3 gp per 10 acres plus 10 gp per household per year.
A vassals pays 1/3 of their income to their liege.

The trend in my campaign for the sovereign rulers to convert the feudal levy into money payments.. While called fines the Overlord and the great nobles of City-State prefers that their vassals pay fines rather than personally show up for service. This way they can hire mercenaries that are loyal to them and can serve all year long.

One problem tho is that the City-State nobility is still very much dominated by the ethos of the Tharians which places a premium on personal honor and strength. So the Overlord needs to keep calling on the service of a number of his retainers so that they continue to remain loyal. Luckily with the creation of the marches they owe loyal to him personally not to the great clans.

This is not an issue with the Ghinorians of Dearthmead or the Elessarians of Halnar. Dearthmead is happy to pay fines for most of their obligations in exchange for the Overlord leaving them alone. Because of the threat of the Kingdom of Antil, Halnar is a firm ally of the Overlord. But they rather keep their levies at home on the border with Antil so they are glad to pay the fines instead.

For those of you who went through the Brave Halfling's Ruins of Ramat at the conventions Hex 0106 is where I was placing it.
Posted by Robert Conley at 6:00 AM

I like it! It makes a lot more sense than a city with no farmlands around it. I'm guessing you're a Harn fan, as that is what the color map looks like. If not, you should check it out.

Yes Harn is my direct inspiration for my mapping style. The only reason the regional map is not in color that color is a lot of $$$ at Lulu. Otherwise it too would be in color.

But not to worry the original files are heavily layered so I can make color version easily.