Eoleander, Ashling, and Syrivald pooled their silver and made a list of what they needed for the expedition. Most of it was food, and healing potions at 30d a crack. They inquired where they can find the local lexigraphers where they can buy a blank codex. As it turned out Gormmah had only two lexigraphers, the first was addicted to drugs and had a very poor reputation. The second one didn't come with a great recommendation but was noted for his low prices.

(Point D)
So Ashling and Syrivald went over to Soltis of Virime to buy a codex. According to his entry in Shiran he was a competent scribe, but sells inferior wares. I had a lot of fun describing the general inferiority of his good. Tim asked how Ashling thought of one codex with intricate tooling. I replied, "Well It looks like he put a lot of work into it but it looks rather crappy." I think it was out of pity that Ashling bought it for 13d.

Eoleander was going out and buying every healing potion he could find. This turned out to be 16 potion total. Also he bought the rations the party needs. They now had ten days each weighing 20 pounds.

Dismayed at the inability of finding a decent codex to use as a forgery they hit on the idea of buying some from the Chancery. During the conversation with Soltis the Lexigrapher it came up that the Gormmah Chancery imported much of their vellum from Viridistan. So they headed over to Caer Shira. As the Chancery lies within the Castle courtyard the guard will allow only those with business to enter. Ashling fumbled his initial response but managed to recover with a bribe and some fast talking. The guard even told him which clerk to see, Peris.

They when into the Chancery and found Peris. Peris was all beside himself at meeting a real life elf. Ashling stroked his ego and had the clerk eating out of his hands. As it turned out he imports the codexs that Haradan writes in and had an extra around. So Ashling buys it for 35d plus throws in 2d for a tip.

The next two days are spend creating the forgery and copying. Finally the party is ready to execute their scheme.

First Eoleander head to Haradan's house. He had to talk his way in but Haradan finally agreed to meet him. Dwayne roleplayed the encounter pretty well manipulating Haradan feelings about his lost codex. Eoleander story was that he felt bad about the robbery so investigated it for himself. He found the journal in the street and is now returning it to Haradan. They eventually agrees to a gold crown (320d) plus another 100d as the finder's fee.

Then bombshell hit. The players thought the codex was this highly valuable repository of information. As it turned out it was really Haradan's notes on various ruins. Very useful but not something that worth the 10 gold crowns the Mardan was talking about. In fact what had happened is that Haradan came into an inheritance worth 10 gold crowns in stored it in his study. Apparently while Mardan and his accomplishes were trying to force their way into his study the exterior stairway collapsed. The inheritance was quickly banked with a moneylender after that.

Eoleander realized that Ashling was about to walk into a figurative trap with the Madmen. That they were not going to give two shits about what he had. He started running as fast as he could to the Green Wyvern.

(Point F)
While this was going on at Haradan's Ashling got ready to go to the Madmen's headquarters. It was located in an abandoned basilica near the Undercut. On the way he ducked into an alleyway and roughed himself up to make himself look like a badass. While doing this he missed Eoleander running by. Finally he gets to the basilica banishing a crossbow and having a I am not going take no shit attitude. Combination of that and him being an elf caused the teenagers guarding the gate to run away. (Note the Elves of the Majestic Wilderlands are inspired by Tolkien's elves and are considered a very tough race not to be crossed.)

He was met outside of the basilica's entrance by one of the lieutenants of the Madmen with three thugs. They talked about Mardan, about how much of a screw up he was, and that Ashling now has what the Guilds want.

Meanwhile Eoleander grabs Syrivald, Syrivald grabs his backpack and the two are running to the undercut.

The lieutenant takes Ashling into the basilica where he meets the Warden of the Madmen, their leader. Flanked on either side of the Warden are two thugs for a total of seven in the room. The two being talking, the Warden definitely doesn't appreciate being approached this way but is interested in what Ashling has. Warden agrees to see what Ashling has and so Ashling tosses him the sack. The Warden pulls out the two candlestick and the ornate box with the forged codex in it. With a look a disgust he throw it down to the ground. He refuses to give Ashling anything but is willing to let him walk out with his life. Ashling again demands that he at least gets the remaining 100d calling the Madmen thugs incompetent and why should he suffer for their mistakes.

One of the thugs steps out to challenge Ashling and the Warden say I will let you out alive but I don't think he will. Ashling then hits the entire room with a sleep spell downing everyone except the Warden. I ruled that Ashling had surprise so the sleep spell doesn't count as his action. Ashling rolls initiative and wins shooting the Warden with his crossbow. Unfortunately the Warden is a 5th level thug so the 5 points of damage are shrugged off. The Warden steps up and attacks dealing Ashling 3 points of damage. Taking him down over half of his hit points.

The next round Ashling wins again and runs. The Warden sends his thugs after Ashling. Meanwhile Eoleander and Syrivald make to the Undercut. They spot two thugs lounging. Eoleander walks up to one and levels his Knight Killer Crossbow at him. The Thugs start backing away. Eoleander shoots one doing 5d4 damage and tells the other to guide him to the Madmen's HQ.

As they walk up the street, Eoleander is reloading (a Knight Killer takes 6 rounds to reload). From out of a side street comes out Ashling. Eoleander turns and shoots one of the thugs killing him. Syrivald then cast Sleep bring down the two remaining thugs. By this time a crowd is beginning to form. Crys for the guard to come are starting to be echoed. With all their gear on them the three decide to leave Gormmah immediately and leave through Peden Gate. By the time the guards get organized for a search they are a 1/2 mile out of town.

They spend the rest of the day (4 hours) hiking north where they stop for the night. Syrivald and Eoleander try to first aid but Eoleander just makes it work causing an addition point of damage. Finally Ashling does it himself and gets one point back.

The map below so the campaign area and marks where they stopped at the end of the first session. 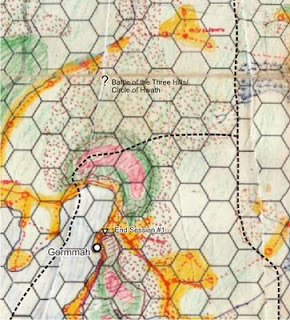 Columbia Game's Shiran is currently out of print. You may be able to find it at Nobles Knight Games or other outlets specializing in older games. It is found as part of the Cities of Harn. The Green Wyvern is part of the Inns of Harn here.
Posted by Robert Conley at 6:00 AM