So I am working on the game for next week and I want to work out what the immediate region of Gormmah looks like. Plus it will probably be wilderness travel as they will need to swing around the Barradine Mountains to the east and since the western route is blocked by armies fighting.

Like I mostly do in these circumstance I drew a map
......
a really big map.

The texturing is terrain with the light gray hills and the darker gray mottled area mountains. Then there are several large swamps. The color is vegetation. The light green is 50% or lower woods, the dark green 50% or high woods. The brown is alpine terrain with scrub no tree, and the white is ice and snow. The brown-yellow mottled area are croplands. On the full scale version you can see a light texture that looks like plow farrows.

The Solid Square is Gormmah a city. The solid circles are castle towns with pop between 1,000 and 500. The open circles are keeps with pops between 600 to 300, and the diamonds are village with between 100 to 250 people. The upside down triangle are mines, quarries, and lumber camps. The rightside up triangle are points of interest in this case legion posts on the border between the factions and city-state.

The village are manorial in nature and are at the center of a large estate running between 1,500 to 3,000 acres. By happy coincidence the 2.5 mile hexes are roughly 3,000 hexes. So for every two hexes on level terrain there will be three villages. The pattern of settlement is dense population in a narrow area with the wilderness beginning outside of the area of cultivation. This is different the usual wilderlands setup where there is a single settlement then wilderness.

If your cultures are oriented more towards individual farms rather than manors then the pattern of settlement would change. Instead of a 3 small villages for every three hexes there would be a single large village or keep at the center of a large 12.5 mile hex. Each 2.5 mile hex would have about 100 households or 400 to 600 people scattered across numerous farms. The large village would have about 100 households for 400 to 600 population. Since each 12.5 hex has 25 smaller hexes this give a total population of 2,600 households or 13,000 people if the large hex is fully farmed.

The following shows the area I detailed out of the main campaign map. 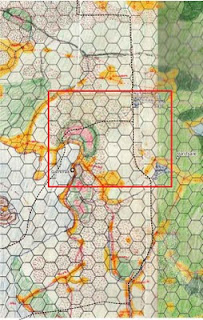 Again, beautiful map Rob. Just need to figure out how to get those hex numbers included without getting lost in the hills...so to speak.

Thanks and as far as the hex numbers goes I should have realized I did fix this for another project. It involves making sure that the color of the "shadow" around each number matches the color of the background.

I will do that if I make this map part of a published product but for weekly game it is way too time consuming. I think it took a quarter of the time on the other project to tweak all the colors so they worked right.

Very nice map. Where are the cartographic symbols for magic items, artifacts and relics? I don't see them on the map.

I really appreciate the time you are spending on this, being the happy beneficiary of your work.

I have been leaning towards judges guild 5mi hexes (partially cause I want to drop in my judges guild stuff easily) But various things are disillusioning me about that scale.

Also, how do you come up with names for all those villages!

The way I come up with names is use a syllable system with lists for prefixs, middles, and endings.

I do the same for the villages
The trick to make the word part pronouncable in their own right.

Great looking map, Rob! You've probably already addressed this somewhere else, but what software do you use to create your maps?

CorelDraw X13 although the open source Inkscape at http://www.inkscape.org is capable of doing everything needed to create this map.