I achieve another milestone in learning to do mapping. I finally figured out a practical way of doing shaded relief in CorelDRAW. 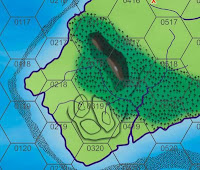 The mountain I already learned how to do from Campaign Cartographer 3. It is a tool called Bevel on most software and if you set so that it bevel all the way to the edge it produces a nice relief shading of a ridge. Still need to play with the lighting options a bit.

The real trick was figuring out how to do slopes. Not just of hills but of partial slopes as well. Partial slopes are common around river flood plains where streams cut ravines into the higher uplands before joining the river.

The trick here was using the drop shadow tool. Basically I give a shape a drop shadow but I don't offset it. I play with the setting to give a halo around the shape. I break apart shadow from the shape. Then use my trim tool to punch out the middle of the shadow. Corel doesn't like this much so I have often convert the shadow into a bitmap and then do the trimming. The downside is that a lot of bitmaps will bog down the software.

This makes a nice hill slope. For partial slopes, I draw another shapes around the sides of the slope that I don't want and then use the trim command. The result you can see above.
Posted by Robert Conley at 11:47 PM