From the Attic: Majestic Wilderlands: Kingdom of Croy

Even among reavers and bandits can be found philosophers.
- Lewellyn the Blue - Master of the Esoteric Arts, City-State. 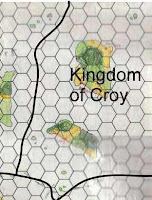 Background
Brezal and Croy were settled two hundred years ago, during the great wave of Skandian raids. The small population of the island was quickly overwhelmed by Skandian settlers. The island served as a spring board to for further raids to the east along the coast of Kalnala and to the south along the coast of Nomar. The great warbands that founded Tarantis and Ossary were organized in Croy before launching.

During the Viking period Croy began to be known as neutral ground. This reputation was enhanced when a group of adventurers discovered a sapling of Yddgrasil, the World Tree, in a deep cleft in the northwest of the island of Croy. A shrine was quickly built and Skandians pilgrims from all regions began to visit.

Fifty years later as the tumult of the Viking period began to subside the two islands were consolidated under the iron fist of Haakon Ironhand. Haakon realized there was more to gain from trade than from continual raiding. With income coming from pilgrims visiting the shrine he fortified Castle Croy and made it one of the most formidable castle on the Winedark. The Croy Fair was estabilshed to coincide with the weeklong Festival of the Tree celebrating the founding of the sapling.

The Skandik Viking looted some of the greatest treasures of the Ghinorians during the foundation of Tarantis and Ossary. In those treasures were texts and scrolls dating back thousands of years to the foundation of of the Empire of Ghinor. Haakon's son, Olaf Fairhair took an interest in these works and bought as many as he could find. He expanded the Shrine of the Tree to house these lore and invited the best Skandik scholar to live there. The Shrine of the Tree became known not only as a place of prophecy and religion, but of learning as well. Haakon and Olaf's heirs continue the tradition laid down by their forefathers to this day.

In the ensuing decades, Ossary and Tarantis have become rivals for control of the lower Winedark Sea. However separated by the Winedark Sea the two Skandik powers have been too evenly matched for one to win a decisive victory. Croy is often used as neutral ground to negotiate a truce or settlement.

The Kings of Ossary have grown weary of the stalemate. In the last decade they have been formulating rebellion among the Lords of Brezal in hopes of splitting Croy and making it vulnerable to conquest. Some say this plan was whispered to King Alkazed ear by minions of Set.

Croy never played much part in my Majestic Wilderland campaign. The one campaign that heavily involved Skandiks was based around raids from City-State on Ossary. This sat in my notes for nearly 15 years until I started writing Map I for the Wilderlands Boxed Set. I reworked it for the smaller scale and threw in a element of Bod Sr.'s sci-fi background.

Unlike the Majestic Wilderland version the Library of the Lost and Hidden Museum is actually a remenent of the older technology period that was buried in the valley. It was rediscovereed when the Skandik settled Croy.
Posted by Robert Conley at 6:00 AM

Great job. Just the place my party of adventurers would want to visit.

It also the original anchorage of the demi-humans when they arrived in this area several thousand years ago.

So there may be some stuff left over from that time.