Is your D&D 5e Character Rare?

Five Thirty Eight niche is using statistics to analyze sports and politics. But occasionally they turn their attention other topics. This time was the different type of DnD 5e character made with DnD Beyond, the online tool officially licensed by Wizards of the Coast. Recently Curse, the company beyond DnD Beyond supplied Gus Wezerek of FiveThirtyEight with a breakdown of the combination of class and race people were making on the service.

Looks like there quite a few folks using the tool numbering in the tens of thousands. Below is the data presented in chart form. It look like the winner is the good old Human Fighter followed by the Elven Ranger. 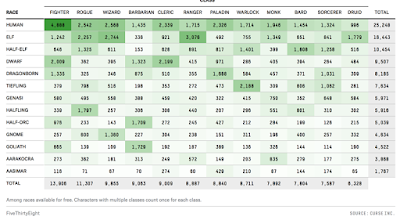 Posted by Robert Conley at 8:34 AM

Just not those are not hard pc numbers but pcs per hundred thousand. The article gives no clue about user numbers. They're basically percentages with the decimal points.

Those are only the ones using the free version. If you are using a custom race or a nonstandard class it won't pick it up.

I sure wish there was such a tool for other versions. I dont think there is enough of a market for one though. I should dearly like to know if my 1e gnome fighter is "normal" or "rare." Is his alignment normal or rare? Is his weapon choice normal or rare? And so forth!

Considering that I'm playing a Halfling Artificer (from Unearthed Arcana), I'd say mine must be pretty rare.