City State of the World Emperor

Right now I am running two campaigns, the first is on Wednesdays and is using Adventures in Middle Earth with +Tim Shorts and +Chris C.. The second is on Thursday nights and involves several friends I made back when I running boffer LARP events; Josh, Mark, Adam, and Jeremy. The second campaign is using Swords and Wizardry and my Majestic Wilderlands Rules.

It centered around the City State of the World Emperor or the City of Spices or Viridistan. Currently the year 4475 BCCC, (Judges Guild stuff was set in 4433 BCCC) the last Viridian Emperor is long dead, the civil war that broke out in the wake of his death had wound down a decade ago (in game time) thanks to the decisive action of the PCs in an earlier campaign. Viridistan is ruled by a council (formed by yet another PC group back in the mid 80s) and is basically a powerful merchant republic.

Our cast of character for the current campaign is

Right now the party averages about 5th level and just aquired a small merchant ship. It is because of this that I adapted the trade rules from Adventurer Conqueror King for the particulars of my Majestic Wilderlands. Once I get the kinks out I will be posting them for people to use.

One of the prep I did for the campaign is started work on the Majestic Wilderlands version of Viridistan. 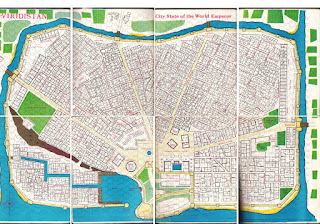 In the early 90s just before I started using CorelDRAW I worked on a hand drawn map of the above. The below is as far as I got. 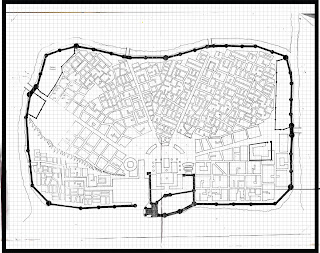 One of the main differences is that due to how I presented the Viridian as a demonic race there were no temples in Viridistan when it was under control of the Emperor. The various temple in the present of 4475 are basically the equivalent of a storefront church that you see in the downtown of various communities.

Currently this is the status of the new map I been working. 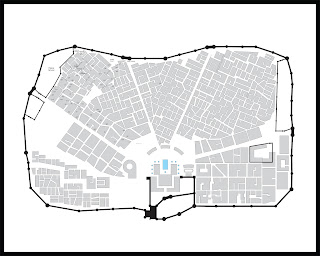 Now that all the city blocks are in place next is to draw in the coastlines and transfer the numbered buildings from my original. Unlike many RPG cities, CSWE had the referee place all the building themselves. There was a little underscore where the assigned number could be written.

Once I transfer the number, I can start dividing up the various city blocks into individual buildings. The main difference between my take on the City State Invincible Overlord and the original CSIO is how each CSIO city block is divided up. The building sizes are more realistic and there are lot more alleys.

Hope you enjoy this little peek into what I do to run my campaigns.

It makes me so happy to hear that previous campaigns are able to make a dent in the world. This is very important for long-term worlds IMO

Much appreciated post! I am running a game in Irongate on GH, and mapped the whole city, so seeing the original as well as Majestic version is wonderful. I am suprised how small the city is for its inhabitants. So these all must be multi-family insulae-style high rises.

I own the whole set of the CSotWE and have never really liked the official hex map they made for the City State. Would it be possible to get high res copies of your version of the map? It looks so much better. I would only use it within my own RPG campaigns. Kindest regards, Erik Brickman (in Sweden).

BTW, my email address is: dracopticon@hotmail.com