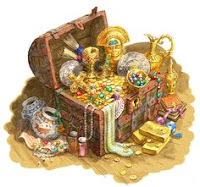 I been working on random treasure generation for my Majestic Fantasy RPG and just got done a few days ago with the first pass on the tables. On paper it seems reasonable but when I coded them up and looked how they worked. It was not entirely what I expected. So I been playing with the odds to get it more in line with what I expected and then I will edit the rules to match it. The Details

In this day and age if you going to make a detailed set of random tables take the time to code them in for Inspiration Pad Pro or tablesmith and generate a 1000 results.
A while ago I coded up the OD&D treasure tables for my own use and generated several rather large locales off of it like the Wild North. So I developed a sense of how much magic items there are versus the monetary value of a treasure. Later I started using Gygax's monster and treasure assortment which generally produces similar results to the treasure type system.

I developed my take on Treasure Tables off of what +Matt Finch wrote for Swords & Wizardry. It is a system where you calculate the value of the hoard then roll for "tradout" in 100 gp, 1000 gp and 5000 gp blocks. If you roll a 19-20 than the gold is traded out for jewelry or magic items. But only magic items if you roll a nat 20.

The result is nothing like the treasure type system of ODnD or ADnD. It doesn't generate any where near the number of jewelry or magic items the original system does.

I like the general algorithm of Matt's scheme so I am tweaking the odds of the tradeouts to get something closer to what I been using. The lesson here is that it pays to spend the time getting into a computer utility to see what it does over 1000s of rolls.

What a treasure trove it would if you posted all your random table code. I'm just starting to play with Inspiration Pro so I'm just a newb.

+Seven Wells I will, still in the process of tweaking it.