A sneak preview of a GURPS Dungeon Fantasy Character

Over on the kickstarter, the SJ Games crew released a preview of a Dungeon Fantasy Character. 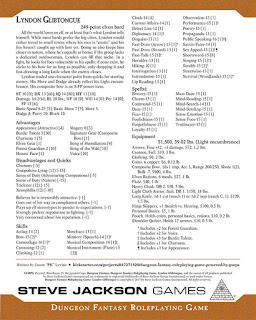 First off kudos for releasing a Bard character first. There been considerable debate over the fact the project is oriented towards Dungeon Fantasy and that all that it will support is hack and slash gameplay. Looking over the Bard character you can see that the character has plenty of skills (Carousing, Savoir Faire. Merchant) that could be used in pure roleplaying encounters.

Also as far as being a GURPS character it looks pretty standard which should make using the rest of the GURP line pretty easy to use if you want too. Of course compared to a OD&D character there is a lot more there, but I think people will know that when they try this game.

The key will be how easy it is to make this character? With the 4th edition core books it is a matter of going through voluminous lists which takes considerable time and very confusing to a novice. With the Dungeon Fantasy RPG hopefully it is as easy as going through the 2nd edition boxed set with its 72 pages of character rules.

Posted by Robert Conley at 9:21 AM

Yikes. Too many skills and advantages!