So for my lunch hour project I been working on Random Treasure Generation for my Majestic Fantasy RPG. First as I stated earlier, making a decent random treasure generation is surprisingly a lot of work. And that it is critical to code it up using software like NBos's Inspiration Pad Pro to see if what you expected happens over 100 to 1000 rolls.

I realize I sound critical, but I do know that for many referee an extremely low number of magic items is what they prefer for this campaign. However this does not fit how I been running my Majestic Wilderlands for the last decade. I been using the ODnD treasure tables and Gygax's monster and treasure assortments. Magic items are not plentiful in either but they do appear about 20% of time with the type of item appropriate to the power of the creature.

The general idea behind the Swords and Wizardry treasure generation system is sound so what I been doing is adjusting the odds in Nbos's Inspiration Pad Pro until it product what I expected over a 100, and even 1,000 rolls.

Much better for how I run my campaigns. Again the lesson, if you going to do an elaborate system of random tables, code it up to see if it does what you expect it too.

Now for the second half of my post. How do you code this up with Inspiration Pad Pro. Today I will cover the basics.

The first thing to remember is that Inspiration Pad Pro random table are just text files that can be edited in notepad. The newest version has a built in editor as well. The file is saved with a ipt extension instead of a txt extension. You will need to place your file in a folder in the generators folder where you installed IPP. 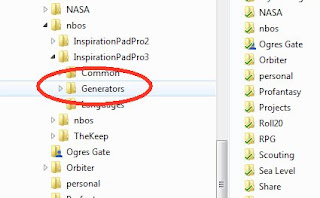 Table:(name) is used to name the table which is not important for a file that has single table. However if you have sub tables then it become important.

Next Roll:(dice roll convention) defines what type of dice I will be rolling.

Finally you terminate the table with EndTable:

With each item having equal odds of appearing.

With this you can define one table per file and save them in a folder underneath the generator folder. When you fire up IPP then you will see them appear.

Is there is more? Yup, and I will cover that in another post.
Posted by Robert Conley at 12:45 PM

Being critical isn't necessarily a bad thing. You are able to show your work and explain why you do it the way you're doing it. That's a good thing.

Also: I'm totally not a robot