Lets look at the DnD Basic rules in detail.

The purpose of these posts is to summarize the rules accurately with commentary from the perspective of an OSR Publisher.

We will get to Backgrounds in a second. I found an interesting post by Warthur over on the theRPGsite. That breaks down the experience points requirements for DnD 5e and compares them to other additions.

At first glance with the first three levels it looks like DnD 5e progression is way faster than older editions. 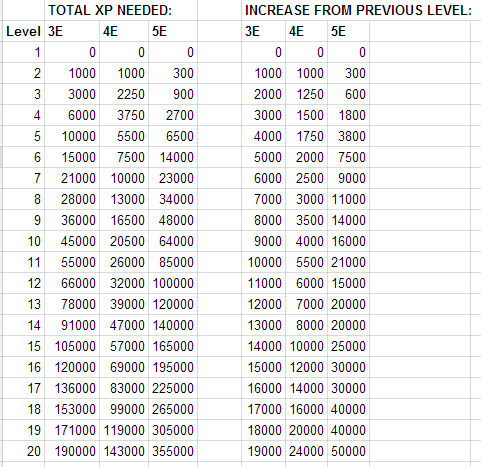 However that only true for the low levels. By 5th level 5e equal the requirements of older editions and afterwards greatly increases the number of xp required. If I am ever allowed to do a MW supplement for 5e I will probably present an alternative xp chart. I am in the camp that has a lot of leveled NPCs in the setting.

But I can see the point of this and can live it with for a straight 5e campaign if I had to. They are obviously trying to get characters up fast to the mid levels and hold them there for a while.

This section focuses on the roleplaying elements of DnD 5e. First are Characters Details including name, sex (which has generated controversy*), Height, Weight, and yes the nine fold alignment system. They added unaligned for unthinking animals instead of neutral.

*I am firm proponent of treating people like people and intensely dislike bullying and discrimination. In no small part this is due to the fact I am 50% deaf and suffer language impairment which is part of the cause of my deafness.

My hearing aids compensate to a point. I live in a world of partial silence and miss many of the verbal cues that make up normal human interaction. The net result that many wind up thinking I am a goof or worse an asshole because I either misheard them (most common) or didn't hear them altogether. I learned to overcome this but I would lying if I said it isn't a pain in the ass to deal with.

While my problems are not the same as the discrimination felt by the LGBT community, it has left me intensely aware of the impact of discrimination. As long a person is not harming another it none of my damn business what folks do in their bedroom or how a person feels about their body.

And as the controversy and drama that surrounds the sex section. Ask for proof , links and do your research. Don't rely on me, or somebody else before forming your opinion. There is lot of baloney floating around along with a lot of I said, he said telephone tag rumors.

And that is all I will say on the topic.

Next are backgrounds. Which I consider to be an outstanding addition to any DnD addition. Unlike 2e's kits these are independent of class. You can be a noble thief, a criminal wizard, a sage fighter, or a folk hero cleric. Of the myriad play styles that make up tabletop RPGs, I consider myself a roleplayer when I sit on the player's side of the screen. I like to immerse myself into my character and interact with the players and npcs of the campaign.

Along with is usually a subtable that you can roll on to further detail your background. For example a criminal can roll to see what their criminal specialty is. Anything from being a Blackmailer, Enforcer, to a Smuggler.

Finally each background has tables for Personality Traits, Ideals, Bonds, and Flaws. I think they are a great tool to mine for ideas, for you are stuck on a detail, or for the novice starting out. Like all mechanics focused on roleplaying these are presented more as guidelines than rules you much following. I can see them useful for randomly generating dozens of NPCs traits as well.

Last are inspirations. I stated before I am not a fan of meta-game mechanics. Thinks like fate points, whimsy cards, GURPS luck advantage that have you looking at the wall clock, and so on. As meta-game mechanics goes this is reletively mild and can be ignored. For good roleplaying you get awarded inspiration. Which you then use later to give yourself or another player advantage on a roll. Either you have it or don't there is no stockpiling like fact points. There is also no mechanic or economy to impose complications. Although if you really want to do you can probably adapt the mechanics from Fate.

I give this chapter an A+ and if they follow it up on it in the PHB and the DMG it will make me very happy as it would mean that roleplaying will be as emphasized as much as combat.

Don't forget you can download a 5e character sheet I created from this link. It is designed to print out on one sheet of paper and fold over so you can use the inside for notes.

I've followed your blog for a while now (the better part of a couple of years actually), and felt moved to comment -- I have for a while, but not had much to apply ;D Your "footnote" about discrimination is a wonderful thing. I honestly had noticed the gaps in grammar to some of your posts (my Grandmother was an English teacher, and -- sometimes annoyingly -- that sort of thing stands out to me more than most), but have always been inspired by your work, and can sympathize. While I don't necessarily suffer from hearing impairment, I do have a considerable attention deficit, and am sometimes not able to immediately process what people are saying unless paying strict attention to them. I completely understand how this affects your outlook and sensitivity to the discrimination of others -- kudos to you, sir, for coming forward and making your statement. Sorry for such an elongated comment, but I could simply sum it up with "rock on, you" ;d

I found the level progressions to be a bit fast for my tastes at the lower end.

I created an alternate advancement (that meets the current one at level 10) that slows down the early levels a bit.

Thanks for posting that little excel sheet of the level progression. I needed a quick reference to decide if I wanted to keep an old house rule. I liked my xp progression better mathematically, but it was too much to expect my players to adapt to. http://anarchydice.blogspot.com/2014/08/house-rules.html